Nevada could face suit for dumping patients in Calif.

San Francisco City AttorneyDennis Herrera is demanding that Nevada reimburse California cities and counties for treatment of about 500 indigent psychiatric patients who were given one-way bus tickets to the Golden State in recent years.

Those costs include about $500,000 that Herrera says San Francisco spent on medical care, housing and other aid for 20 people shipped here in a practice sometimes called Greyhound therapy.

In a letter to be sent Tuesday to Nevada Attorney General Catherine Cortez Masto, a draft of which was obtained by The Chronicle, Herrera threatened to file a class-action lawsuit accusing Nevada of misappropriating public funds from California unless the neighboring state agrees within 20 days to reimburse cities and counties and to adopt interstate transfer rules for patients.

Those would include confirming that a patient is a resident of the city where he or she is being sent, or has family there.

Herrera’s office, which subpoenaed bus company records, says it has the names of nearly 500 patients who have been discharged from a state-run psychiatric hospital in Las Vegas since April 2008and sent by Greyhound bus to California. Of those, 24 sent to San Francisco were indigent, homeless and suffering from mental illness, according to the letter. Twenty of those received medical care or other city-funded treatment in San Francisco.

Officials in Masto’s office and at the Nevada Department of Health and Human Services declined to comment, citing the impending litigation.

The practice, sometimes referred to as patient dumping or Greyhound therapy, has long been rumored as a way for other jurisdictions to transfer their mental health or homeless problems to more liberal enclaves like San Francisco. Herrera said there now is evidence to back that up.

“I don’t think there is any doubt that it occurred in this case,” he said. “Here you have a very well-documented case of a state-sanctioned patient dumping scheme.”

San Francisco has a program where transients are given bus tickets, but city officials say it is much more comprehensive and beneficial because it verifies the bus ticket recipient has a family member or friend at the destination willing to offer a place to stay and ongoing support. The program, Homeward Bound, also ensures the bus riders are sober and medically stable enough to travel by themselves, city officials said.

Herrera’s pursuit of reimbursement or legal action against Nevada is the product of a four-month investigation into Rawson-Neal’s patient practices after a 48-year-old man showed up disoriented in Sacramento and the Sacramento Bee chronicled his ordeal.

James Flavy Coy Brown, a Rawson-Neal patient, was sent on a 15-hour bus ride to Sacramento, despite having no family or friends in the area, and with no arrangements for his care, housing or treatment. Hospital staff allegedly gave Brown a one-way bus ticket, peanut butter crackers and a three-day supply of medication to treat his schizophrenia, depression and anxiety. He reportedly was told to call 911 when he arrived in Sacramento.

Mike Willden, director of the Nevada Department of Health and Human Services, acknowledged in April that there had been “a documentation error” at the Rawson-Neal hospital and that hospital officials were reviewing the cases of all patients sent out of state “to ensure the quality of discharge planning and after-care plans.”

Willden said that the hospital “has a strict policy for discharging patients” and that Brown’s case “appears not to be systemic.”

Later in April, the federal Centers for Medicare & Medicaid Services warned the hospital to clean up its act or else face the potential loss of its Medicare funding. This month, the federal agency said the hospital was still not in compliance with care requirements in four different areas and could lose the funding by Nov. 6. The hospital received $3.2 million for Medicare in fiscal 2011-12.

San Francisco investigators have also identified at least one patient, who is deaf, blind and largely mute, who was bused to San Francisco twice from different hospitals in the Reno area, which Herrera said suggested patient dumping was not unique to Rawson-Neal in Las Vegas.

“We do have reason to believe that this occurred elsewhere in Nevada,” Herrera said. “It would be premature to say how widespread it is in other facilities. Our investigation is continuing.”

Shared from News on Flipboard. Download Flipboard for free here. 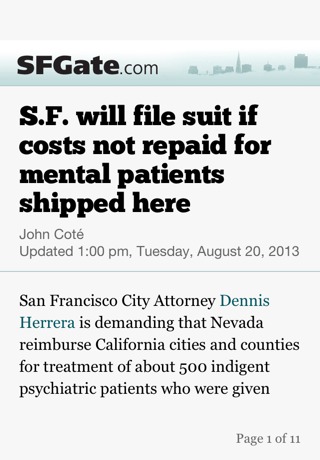