BEIRUT, Lebanon — The United States launched more airstrikes in Yemen this month than during all of last year. In Syria, it has airlifted local forces to front-line positions and has been accused of killing civilians in airstrikes. In Iraq, American troops and aircraft are central in supporting an urban offensive in Mosul, where airstrikes killed scores of people on March 17.

Two months after the inauguration of President Trump, indications are mounting that the United States military is deepening its involvement in a string of complex wars in the Middle East that lack clear endgames.

Rather than representing any formal new Trump doctrine on military action, however, American officials say that what is happening is a shift in military decision-making that began under President Barack Obama. On display are some of the first indications of how complicated military operations are continuing under a president who has vowed to make the military “fight to win.”

In an interview on Wednesday, Gen. Joseph L. Votel, the commander of United States Central Command, said the new procedures made it easier for commanders in the field to call in airstrikes without waiting for permission from more senior officers.

“We recognized the nature of the fight was going to change and that we had to ensure that authorities were down to the right level and that we empowered the on-scene commander,” General Votel said. He was speaking specifically about discussions that he said began in November about how the fights in Syria and Iraq against the Islamic State were reaching critical phases in Mosul and Raqqa.

Concerns about the recent accusations of civilian casualties are bringing some of these details to light. But some of the shifts have also involved small increases in the deployment and use of American forces or, in Yemen, resuming aid to allies that had previously been suspended.

And they coincide with the settling in of a president who has vowed to intensify the fight against extremists abroad, and whose budgetary and rhetorical priorities have indicated a military-first approach even as he has proposed cuts in diplomatic spending.

To some critics, that suggests that much more change is to come, in difficult situations in a roiled Middle East that have never had clear solutions.

Robert Malley, a former senior official in the Obama administration and now vice president for policy at the International Crisis Group, said the uptick in military involvement since Mr. Trump took office did not appear to have been accompanied by increased planning for the day after potential military victories.

“The military will be the first to tell you that a military operation is only as good as the diplomatic and political plan that comes with it,” Mr. Malley said.

The lack of diplomacy and planning for the future in places like Yemen and Syria could render victories there by the United States and its allies unsustainable.

“From harsh experience, we know that either U.S. forces will have to be involved for the long term or victory will dissipate soon after they leave,” he said.

Others fear that greater military involvement could drag the United States into murky wars and that increased civilian deaths could feed anti-Americanism and jihadist propaganda. 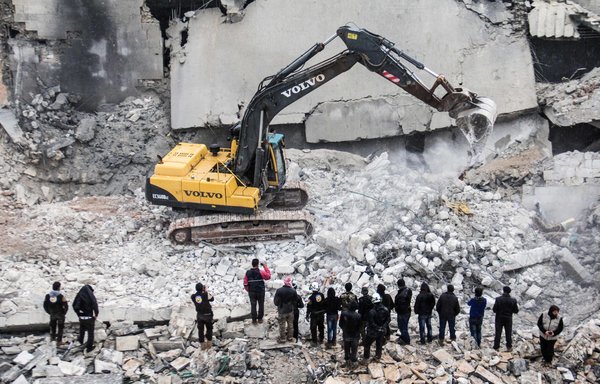 Volunteers moved rubble after an airstrike this month on a mosque complex in Al Jinah, Syria.

Some insist that this has already happened.

“Daesh is happy about the American attacks against civilians to prove its slogans that the Americans want to kill Muslims everywhere and not only the Islamic State’s gunmen,” a resident of the Syrian city of Raqqa wrote via WhatsApp, using the Arabic acronym for the Islamic State, also known as ISIS or ISIL. He gave only his first name, Abdul-Rahman, for fear of the jihadists.

The shift toward greater military involvement extends into one of Mr. Obama’s central legacies: the prolonged American presence in Afghanistan, where more than 8,400 American soldiers and 5,924 troops from NATO and other allies remain, and where the Taliban have been resurgent.

Plans have been announced to send 300 United States Marines to Helmand Province, their first deployment there since 2014. And the American commander, Gen. John W. Nicholson Jr., told Congress in February that he would like another “few thousand” American and coalition troops.

But the changes have also been notable in Yemen, Syria and Iraq, all home to overlapping conflicts in failed states where jihadist groups like Al Qaeda and the Islamic State have taken advantage of the chaos to step up operations.

Even while being drawn more deeply into those conflicts, the Obama administration sought to limit American engagement while pushing — mostly in vain — for diplomatic solutions. It also launched frequent airstrikes to kill individual jihadists or to destroy their facilities and sent thousands of American troops back to Iraq to train and advise Iraqi forces, and also provide firepower, so they could “degrade and ultimately destroy” the Islamic State.

But under Mr. Obama, the White House often spent weeks or even months deliberating certain raids and airstrikes out of concern for American service members and civilians — and often to the frustration of commanders and American allies.

Mr. Trump’s tough statements before coming into office, and the rise in civilian deaths in recent American strikes, have raised questions about whether the new president has removed constraints from the Pentagon on how it wages war.

But administration officials say that has not yet happened. And military officials insist that the streamlined process for airstrikes does not exempt commanders from strict protocols meant to avoid civilian casualties.

Speaking before the House Armed Services Committee on Wednesday, General Votel said the Pentagon had not relaxed its rules of engagement. He called the mounting toll of civilian deaths in Iraq and Syria “absolutely tragic and heartbreaking” and said Central Command was investigating their cause.

The complexity of these wars and the American role in them is clear in Yemen, where the United States has two distinct roles, both of which have increased under Mr. Trump.

The country, the Arab world’s poorest, has been split in half since militants known as the Houthis allied with parts of the military and seized the capital, pushing the internationally recognized government into exile.

Two years ago, a military coalition led by Saudi Arabia began bombing the rebels, hoping to weaken them militarily and restore the government. They have made little progress, while more than 10,000 people have been killed and large parts of the country are on the verge of famine, according to the United Nations.

Under Mr. Obama, the United States provided military support to the Saudi-led coalition, but halted the sale of precision-guided munitions over concerns that airstrikes by Saudi Arabia and its allies were killing too many civilians.

But since Mr. Trump took office, his administration has advanced some arms deals for coalition countries, while approving the resumption of sales of precision-guided munitions to Saudi Arabia, according to an American official familiar with Yemen policy.

Mr. Trump’s more muscular approach has been hailed by Gulf leaders, who felt betrayed by Mr. Obama’s outreach to Iran and who hope that they now have an ally in the White House to help them push back against their regional foe.

“It understands that it is uniquely positioned to play a unique role in bringing some stability to the region, and I think there is a meeting of the minds between the Saudi leadership and the Trump administration,” said Fahad Nazer, a political consultant to the Saudi Embassy in Washington who said he was speaking on his own behalf.

At the same time, since Mr. Trump’s inauguration, the United States has stepped up its long-running drone campaign against the Yemeni branch of Al Qaeda, believed to be the organization’s most dangerous.

Mr. Trump granted a Pentagon request to declare parts of three provinces in Yemen as an “area of active hostilities,” giving commanders greater flexibility to strike. Later, a Special Operations raid in late January led to the death of many civilians and an American commando.

So far this month, the United States has also launched more than 49 strikes across Yemen, most of them during one five-day period, according to data gathered by the Critical Threats Project at the American Enterprise Institute, a conservative think tank. That is more strikes than the United States had carried out during any other full year on record.

Some analysts note that this military surge has not brought with it a clear strategy to end Yemen’s war or uproot Al Qaeda.

“As the military line has surged, there has not been a surge in diplomacy,” said Katherine Zimmerman, a research fellow at the American Enterprise Institute.

The United States faces a similarly complex set of overlapping conflicts in Syria, where a brutal civil war opened up opportunities for Al Qaeda to infiltrate the rebels seeking to topple the government while the Islamic State seized an area of territory that extended over the border into Iraq.

While intervening covertly to support the rebels, the United States has ordered airstrikes on the jihadists — alone in the case of Al Qaeda and as part of a coalition against the Islamic State. It has also built ties with the Iraqi security forces, and with Kurdish and Arab fighters in Syria to battle the jihadists on the ground.

But recently, a string of airstrikes have exposed the United States to allegations of killing large numbers of civilians. More than 60 people were killed in a strike on a mosque complex where local residents said a religious gathering was taking place. The United States said it was targeting Qaeda leaders. The military has been accused of killing about 30 Syrians in an airstrike on a school, but has insisted that the early indications show it hit Islamic State fighters. A strike in Mosul killed scores of civilians, although the military is investigating whether militants herded the people into the building or possibly rigged it with bombs.

The rise in reports of civilian deaths linked to the United States and its allies has been so significant that Airwars, a group that tracks airstrikes, said last week that it was suspending its investigations into Russian airstrikes to avoid falling behind on those by the United States.

American officials have attributed the rising number of strikes and the danger to civilians to the urban battlefields in Mosul and Raqqa and the high concentration of civilians in areas held by the jihadists. They say they try to avoid civilian casualties while the Islamic State deliberately kills anybody who stands in its way.

This month, American officials also said they would send an additional 400 troops to Syria to help prepare for the assault on Raqqa, the Islamic State’s self-proclaimed capital, nearly doubling the total there.

In Iraq, General Votel said that in just the past 37 days, as the fight moved into the denser western side of Mosul, 284 of the Iraqi forces had been killed and 1,600 more wounded, underlining the ferocity of the battles.