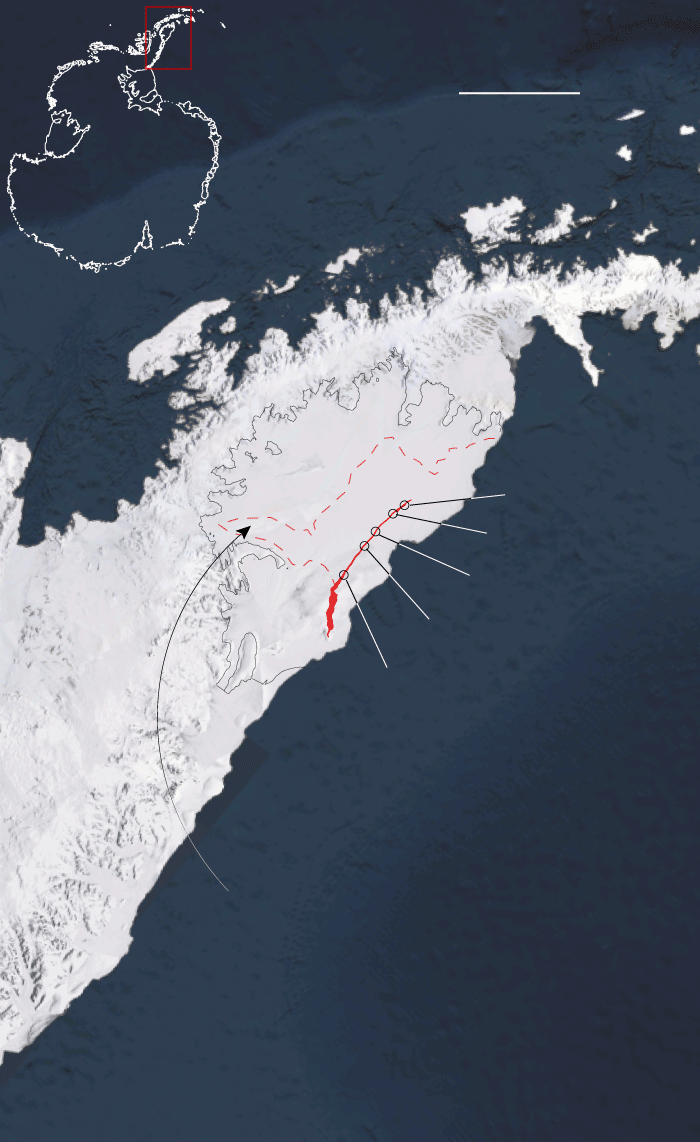 If Larsen C’s shelf front retreats past this line, called the compressive arch, the shelf is likely to collapse.

The crack in Larsen C now reaches over 100 miles in length, and some parts of it are as wide as two miles. The tip of the rift is currently only about 20 miles from reaching the other end of the ice shelf.

Once the crack reaches all the way across the ice shelf, the break will create one of the largest icebergs ever recorded, according to Project Midas, a research team that has been monitoring the rift since 2014. Because of the amount of stress the crack is placing on the remaining 20 miles of the shelf, the team expects the break soon.

“The iceberg is likely to break free within the next few months,” said Adrian J. Luckman of Swansea University in Wales, who is a lead researcher for Project Midas. “The rift tip has moved from one region of likely softer ice to another, which explains its step-wise progress.”

The time-lapse image below shows the rift gradually widening from late 2014 to January of this year.

Ice shelves, which form through runoff from glaciers, float in water and provide structural support to the glaciers that rest on land. When an ice shelf collapses, the glaciers behind it can accelerate toward the ocean. Higher temperatures in the region are also helping to further the ice shelf’s retreat.

If the ice shelf breaks at the crack, Larsen C will be at its smallest size ever recorded.

That would also leave the ice front much closer to the ice shelf’s compressive arch, a line that scientists say is critical for structural support. If the front retreats past that line, scientists say, the northernmost part of the shelf could collapse within months. It could also significantly change the landscape of the Antarctic peninsula.

“At that point in time, the glaciers will react,” Eric J. Rignot, a glaciologist at NASA’s Jet Propulsion Laboratory, said. “If the ice shelf breaks apart, it will remove a buttressing force on the glaciers that flow into it. The glaciers will feel less resistance to flow, effectively removing a cork in front of them.”

The crack reaches all the wayto the bottom of the ice shelf.

The crack in Larsen C is a third of a mile deep, down to the floor of the ice shelf. 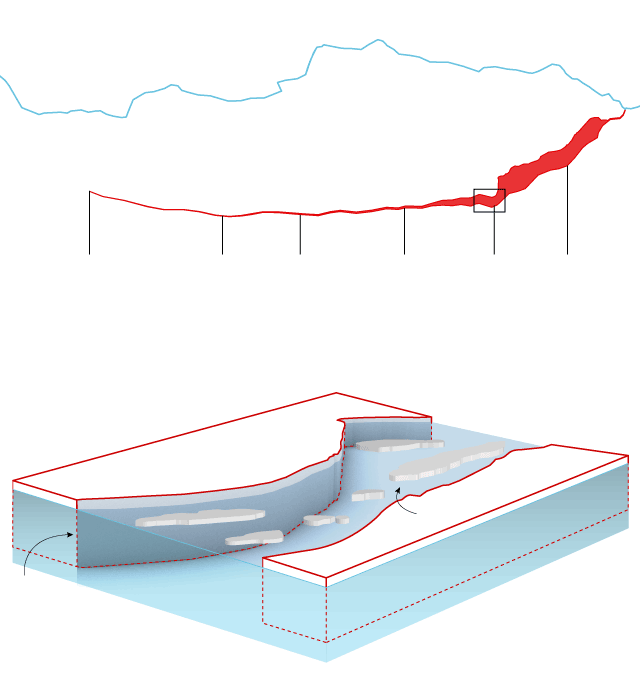 width of the rift

Top of the ice shelf

the rift is about

Scientists fear that two crucial anchorpoints will be lost as the shelf retreats.

According to Dr. Rignot, the stability of the whole ice shelf is threatened.

“You have these two anchors on the side of Larsen C that play a critical role in holding the ice shelf where it is,” he said. “If the shelf is getting thinner, it will be more breakable and it will lose contact with the ice rises.” 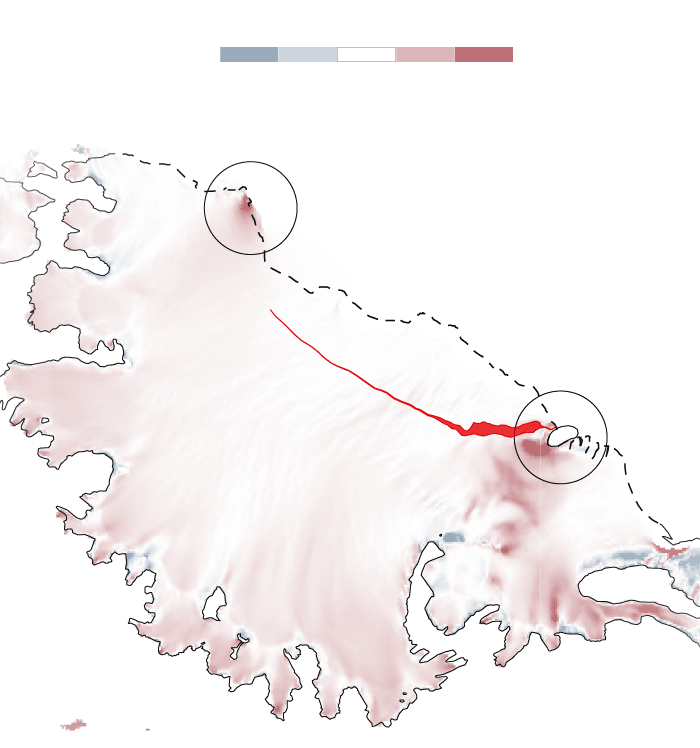 If the shelf front disconnects from the ice rises, a rapid retreat will be triggered.

Ice rises are areas of an ice shelf with higher elevations, allowing them to shoulder more support of the shelf. Scientists have yet to determine the extent of thinning around the Bawden and Gipps ice rises, though Dr. Rignot noted that the Bawden ice rise was a much more vulnerable anchor.

“We’re not even sure how it’s hanging on there,” he said. “But if you take away Bawden, the whole shelf will feel it.”

The collapse of the Larsen C iceshelf may not sharply affect globalsea level rise, but the collapse ofother vulnerable ice shelves will.

The Larsen A and B ice shelves disintegrated in 1995 and 2002, though both were drastically smaller than Larsen C. Neither contributed significantly to global sea level rise, however, because they were already floating above water, and the glaciers behind them did not contain a substantial volume of ice.

According to Dr. Rignot, the collapse of Larsen C would add only a tiny amount of water to the global sea level. Of greater concern to scientists is how the collapse of ice shelves can affect the glaciers that flow behind them, because the melting of those glaciers can cause much higher levels of ocean rise. Scientists see the impending Larsen C collapse as a warning that much larger amounts of ice in West Antarctica could be vulnerable.