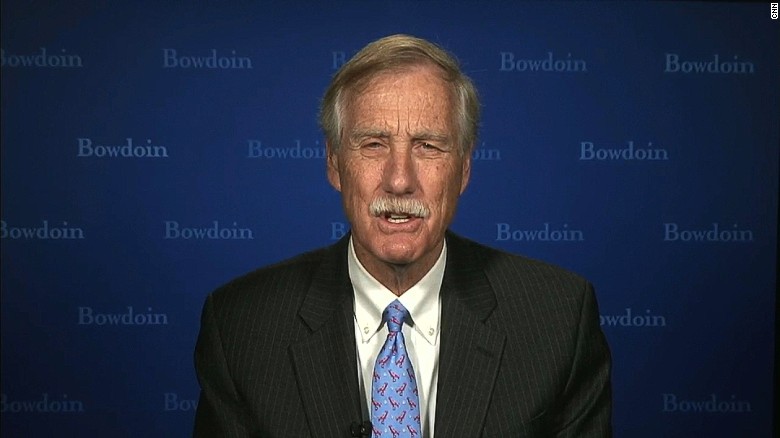 Washington (CNN)Ignoring the conclusions of the intelligence community that Russia sought to meddle in the US election is dangerous, Sen. Angus King said Monday.

The Maine independent, who caucuses with the Democrats in the Senate and sits on the Senate Intelligence Committee, told CNN’s Chris Cuomo on “New Day” on Monday that what Director of National Intelligence James Clapper tells you, “you can take it to the bank.”

“If you blow off what Jim Clapper’s telling you, you do so at your peril,” King said.

Clapper is a retired lieutenant general with decades of intelligence experience across administrations of both parties, King pointed out. ODNI pulls together intelligence from all of the US government’s intelligence agencies.

Clapper’s office, along with the Department of Homeland Security, put out a statement in October declaring that the US government and intelligence had concluded that senior levels of the Russian government had directed the hacking of Democratic political groups in the US and release of information from them with the intent of influencing the US election.

A series of leaks of emails and internal documents from the Democratic National Committee and Hillary Clinton’s campaign chairman over the weeks and months leading up to the election jolted the race, vexing Democrats and resulting in the resignation of officials from the DNC including its former chairwoman. Republicans did not suffer the same release.

The Russia involvement has been a point of contention, however. Despite overwhelming consensus between the private sector and intelligence community that Moscow was directing the attacks and involved in the leaks, President-elect Donald Trump has continually denied that Russia played a role, saying over the weekend he doesn’t believe the conclusion.

“I think it’s just another excuse. I don’t believe it,” Trump said in an interview on “Fox News Sunday.”

The latest dust-up has come over a report from The Washington Post that the CIA has concluded Russia didn’t just seek to sow discord in the election, but actually sought to get Trump elected, following an earlier report by CNN.

“I think (Trump) ought to sit down with some of the top people … and take a deep breath and listen to this,” King said. “I think he’s too defensive right now, and I can understand that. This is serious business, but you know this is not a partisan issue.”

McCain and Schumer appeared together on “CBS This Morning” to discuss the need for the hearings. They, too, agreed the evidence is clear Russia engaged in hacking, though the intentions are still under question.

“I can’t reach that conclusion yet, which is why we need a bipartisan effort to uncover the whole situation,” McCain said. “It’s another form of warfare and the entire issue is going to be examined by the Armed Services Committee because it’s a threat to our national security.”

Schumer said the seriousness of the situation calls for a bipartisan approach that doesn’t devolve into politics.

“We need to get to the bottom of this in a fair, nonpartisan, non-finger pointing way,” Schumer said. “This is something that should unite Republicans, Democrats, conservatives, liberals, patriots.”

Trump meanwhile continued dismissing intelligence reports Monday morning, tweeting, “Unless you catch “hackers” in the act, it is very hard to determine who was doing the hacking. Why wasn’t this brought up before election?”
Tags: environment, Uncategorized