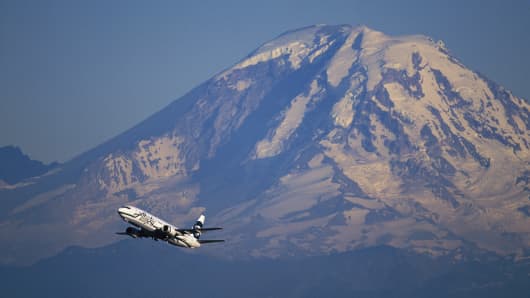 Alaska Airlines has broken new ground this week, with one of its commercial flights using renewable fuel made from “forest residuals.”

The fuel, according to the Washington state-based airline, is composed of the limbs and branches left over after the harvesting of managed forests. The airline claims that it was the first commercial flight using the world’s first renewable, alternative jet fuel made from forest residuals.

The flight Monday was between Seattle-Tacoma International Airport and Reagan National Airport, which serves Washington, D.C. It used a 20 percent blend of sustainable aviation biofuel, which Alaska Airlines said was “chemically indistinguishable from regular jet A fuel.”

The fuel was developed thanks to the work of the Washington State University-led Northwest Advanced Renewables Alliance (NARA), Alaska Airlines added.

“This latest milestone in Alaska’s efforts to promote sustainable biofuels is especially exciting since it is uniquely sourced from the forest residuals in the Pacific Northwest,” Joe Sprague, Alaska Airlines’ senior vice president of communications and external relations, said in a statement.

“NARA’s accomplishments and the investment of the U.S. Department of Agriculture provide another key in helping Alaska Airlines and the aviation industry reduce its carbon footprint and dependency on fossil fuels.”

The airline said that if it replaced 20 percent of its total fuel supply at Seattle-Tacoma, greenhouse gas emissions would be slashed by roughly 142,000 metric tons of CO2, equivalent to taking 30,000 passenger vehicles off the road for an entire year.

The deal, which was reached at the International Civil Aviation Organization’s 39th Assembly in Montreal, saw 191 countries agree to a global market-based measure to control CO2 emissions from flying.