President Rafael Correa says the proposal is dead because too little money was collected to protect the Yasuni national park. 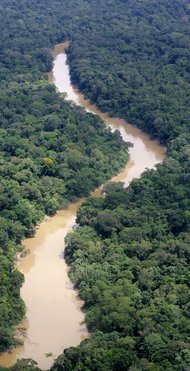 The plan won applause from environmentalists, and international luminaries like Bo Derek and Leonardo DiCaprio opened their wallets. The plan was backed by the United Nations, but governments generally balked at contributing, and only $13 million was collected.

“The world has failed us,” President Correa said as he withdrew the offer in a nationally televised news conference on Thursday night. “With deep sadness but also with absolute responsibility to our people and history, I have had to take one of the hardest decisions of my government.”

The pioneering effort was administered by the United Nations Development Program. It was originally set up after potential reserves of nearly 800 million barrels of oil were found in the Yasuni national park, which is inhabited by two isolated Indian tribes.

Its goal was not only to protect a pristine rain forest with a rich mix of wildlife and plant life but also to ease future climate change by preventing more than 400 million tons of carbon dioxide from being released into the atmosphere. The park was designated a world biosphere reserve by Unesco in the late 1980s.

Local and international environmentalists expressed disappointment with President Correa’s decision, and hundreds of protesters gathered outside the presidential palace in Quito, the nation’s capital.

“It could have been used as a model for other sensitive areas,” said Matt Finer, a scientist with the Center for International Environmental Law, referring to the fund. “But now that it has failed, there is really no alternative model that is attractive to governments unable or unwilling to forgo drilling solely on ecological grounds.”

Oil pollution in the Ecuadorean jungles has been highlighted by two decades of lawsuits against Chevron, whose predecessor, Texaco, worked as a partner with Petroecuador, the state oil company, in the 1970s before it was acquired by Chevron.

Chevron lost a case in an Ecuadorean court two years ago, but it has refused to pay more than $18 billion in damages. It argued that Texaco had done a cleanup and that most of the pollution that was left was caused by Petroecuador after Texaco left. Enforcement proceedings are at various stages in several countries since Chevron has no assets in Ecuador.