(CNN)Researchers have just witnessed something that they say has never before been seen in the field of medicine: Patients who have been severely paralyzed for more than a decade have regained some sensation and neurological control in key muscles.

In other words, they can move again, at least a bit.

Paraplegic people with spinal cord injuries spent a year training on brain-machine interfaces, such as virtual reality systems and robotic exoskeletons, which allowed them to use their own brain activity to simulate control of their legs, according to a small study published in the journal Scientific Reports on Thursday.
The findings suggest that long-term training on such interfaces that utilize the virtual world could help paraplegic patients regain some sensations and possibly mobility in the real world, said Dr. Miguel Nicolelis, a neuroscientist at Duke University who led the study as part of the Walk Again Project in São Paulo, Brazil. 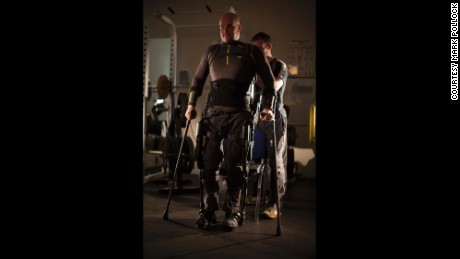 About 282,000 people are living with spinal cord injuries in the United States (PDF). Most of the injuries are a result of traffic accidents, falls or violence, according to the World Health Organization.

“Since I went to medical school, I heard that there was no hope to recover patients with spinal cord injury,” Nicolelis said.

“So, I was shocked. I was really shocked, so much that it took us several months to report this because we wanted to confirm every detail,” he said of the study findings. “Brain-machine interface, we designed this in the late ’90s as a potential technology to assist patients to move, as an assistive technology. We never thought that we would induce neurological recovery in these patients.” 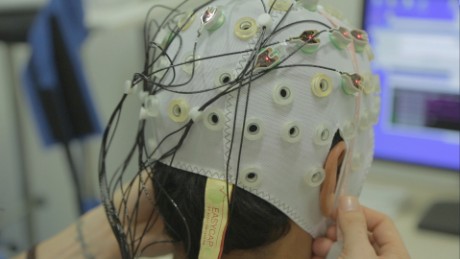 The patients were fitted with caps lined with electrodes that recorded their brain activity.

The study involved eight paraplegic patients who had been completely paralyzed for at least three years due to spinal cord injuries. They were asked to spend at least two hours a week training on brain-machine interfaces over the course of a year.

How did the brain-machine interfaces work? The patients were fitted with caps lined with electrodes that recorded their brain activity. That brain activity triggered movements or behaviors in virtual reality systems and robotic exoskeletons, such as making the virtual avatar of a patient walk. Then, the interface sent signals back to the brain, such as the sensation of movement, Nicolelis said.

“So you’re getting an exoskeleton, and your brain activity is triggering the device to move, and you’re getting feedback from the device. You’re feeling the ground; you’re feeling the legs walking,” he said. “If the brain of a paralyzed person is engaged and imagining movements and controlling a device directly and then the brain gets feedback from this device and the body of the patient is moving too, the brain is reinforced. The brain says, ‘OK, I’m imagining that I’m moving, and something moved.’ “

The researchers conducted clinical evaluations on each patient on the first day of the study and then repeated those evaluations after four, seven, 10 and 12 months. 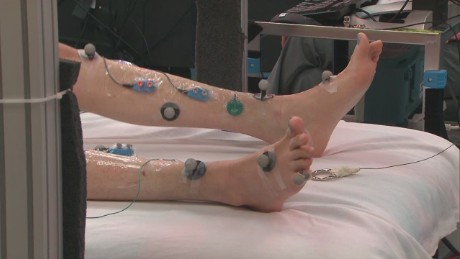 “After we did this for several months, we tested the patients outside of the [brain-machine interface] device, and to our shock, people who were not supposed to move ever again in their lives were spontaneously moving their legs and feeling sensations,” Nicolelis said.

Indeed, the researchers discovered that all of the patients experienced significant improvements in their recoveries. Four improved so much in their sensation and muscle control that their diagnoses were changed from complete to partial paralysis.

Additionally, many of the subjects reported improvements in their everyday lives. Two became more independent in the bathroom, able to more effectively move from their wheelchairs to the toilet. Another patient reported an improvement in moving from the wheelchair to the car, according to the researchers.

In a separate proof-of-concept study, published last year in the Journal of Neuroengineering and Rehabilitation, scientists in California demonstrated that a brain-computer interface system could be used to allow a paraplegic patient to take steps using nothing but a brain-controlled muscle stimulator.

“The study by Nicolelis and colleagues employs very similar methodologies with the addition of tactile feedback,” said Zoran Nenadic, an associate professor of bioengineering at the University of California, Irvine, who led the proof-of-concept research and was not involved in the new study.

“The [new] study presents encouraging findings which demonstrate that a combination of a non-invasive brain-computer interface for restoration of walking and tactile feedback can lead to improvements in both motor and sensory functions in a small group of individuals with paraplegia, or the inability to walk,” he said. “This approach could potentially lead to the development of novel physiotherapies for those with complete or incomplete loss of leg function due to spinal cord injury.”

“What this suggests is that, in the future, you could go to a rehab center for an hour a day and either do a virtual reality session or get inside of a robotic device and walk back and forth for an hour under the control of your brain,” Nicolelis said. “When you get out after this training is done, after months, you basically feel that now you can move your leg. You now have reacquired several functions that you have lost because of these spinal cord injuries.”