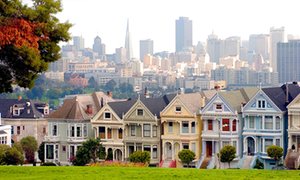 All you need to know about San Francisco in 2016 was on display one recent Sunday at 83 McAllister Street, an office building turned into condominiums at the edge of the Tenderloin.

Prospective home buyers tromped through an open house in a fifth-floor unit: two bedrooms, 430 sq ft, $599,000. Just outside the building’s front door, a couple dozen of the homeless and hard up gathered for Open Cathedral, a regularly scheduled Sunday service followed by a free lunch.

There it was, all in one place: outrageous prices for a tiny slice of a scarce commodity. Haves. Have nots. And the yawning gulf between the two.

San Francisco has the priciest real estate in the country by many metrics. It has been ranked among the 10 least affordable cities in the world. It suffers under the worst income inequality in California. The top 1% of households in the metropolitan area earned $3.6m on average in 2013, according to one recent report, or 44 times the average income of the bottom 99%.

This is the place where a 25-year-old made national news in March for paying $400 a month to live in a wooden box in a friend’s living room. Where a 99-year-old widow went to court in April to fight eviction from the flat she’d lived in since the 1940s. Where the cheapest home for sale in late July was fire-gutted, uninhabitable and still cost $228,000.

Battles rage about what the problem is – an affordability crisis? a housing shortage? lack of political will? – how to fix it, how the city got into such a mess in the first place and who to blame. The current favorite whipping boy is the tech sector, but the pain began long before the first laptop was a gleam in British designer Bill Moggridge’s eye.

But Cohen is quick to note that there are other culprits behind what some realtors peg as San Francisco’s $1.2m pricetag for a starter home and its tops-in-the-nation $3,510 median rent for a one-bedroom apartment: population growth, income inequality, history, geography.

A history of cramped quarters

The first housing crisis on this 47 square mile peninsula exploded before San Francisco was even a city. Between January 1848 and December 1849, Gold Rush fortune-seekers swelled the frontier town’s population from 1,000 to 25,000.

Then, like now, the question of where to put the vast new influx was answered badly.

In his 1851 memoir Golden Dreams and Waking Realities, English seaman William Shaw described “Francisco” as a rude collection of tents, wood-framed houses and “stupendous taverns, gambling-houses and other extensive edifices … From sixty to eighty thousand dollars was the rent of some taverns–houses of timber, iron, zinc or canvass”.

By the time the second world war came and went, the small city had been built out. Growth since has come via successive waves of redevelopment, because San Francisco is surrounded on three sides by water and the fourth by San Mateo County. Unlike Houston, Las Vegas or Atlanta, it cannot grow out.

“You don’t have land and space to work with,” Cohen said. “You have to redevelop and recycle space that’s already been used … As a starting point, it immediately raises various kinds of tensions.”

Since Kenneth Rosen moved to the San Francisco Bay Area 42 years ago, he has counted six boom and bust housing cycles.

The primary cause for the current boom, says Rosen, chairman of UC Berkeley’s center for real estate and urban economics, is something most cities technically envy: “Extraordinary job creation,” 30,000 to 40,000 jobs per year for the last five years in San Francisco alone.

Rosen figures that 70% of the new leasing and job growth springs from the tech sector. For housing costs to drop and affordability to rise substantially, he said, “we’d have to see a correction in that sector”.

‘That’s unheard of in Ohio’

Kevin Bankovich, 29, is moving from Akron, Ohio, to San Francisco.

One recent Sunday, while trawling open houses, he peered into the closets of a one-bedroom, 1.25 bath condominium in the South of Market neighborhood, asking price, $595,000 for 814 sq ft.

On the plus side, a Murphy bed folded out from the wall, space-saving at its most efficient. On the minus, the 11-unit building sported delicate graffiti, and the smell of urine wafted down the street on the summer breeze.

Not that there was much for him to choose from at the affordable end of the San Francisco housing market. Between the last week of January and the last week of July, only seven housing units priced at $500,000 or less sold in the entire city, according to the Multiple Listing Service (MLS).

The week he searched, the MLS listed 31 homes in that price range. Zillow listed 32.

Of those, seven were restricted to low-income, first-time buyers. One was available to those 55 and older. One unit could only be bid on by other owners in the upscale condominium building; it was a maid’s unit on the market for $179,000. Two had been gutted by fire and could not be lived in.

After one weekend, Bankovich gave up looking for an actual house and started shopping for condos. In short order, he decided he didn’t need a garage. Or even a parking space for his motorcycle. Or a washer-dryer in the unit.

He’s sold his car. The one thing he doesn’t want to give up – at least for now – is an actual bedroom.

“I don’t want a studio”, he said. “I need to have that one bedroom at least. That would be my preference.

“There are people who live here, and it’s in their dreams to own a place,” he continued, wistful. “But they say they’ll never own here … Or they have roommates.”

“That’s unheard of in Ohio.”

Compounding the problem of population growth in San Francisco is the fact that the city has built far too little housing for far too many decades. Since 2010 alone, its population has grown by more than 60,000, but only 12,000 new units of housing were constructed.

On the plus side, though, San Francisco is in the middle of one of the biggest building booms in its history.

Most of the new units, however, are in flossy skyscrapers filled with high-end condos. Because, as Paragon Real Estate Group described San Francisco in a spring 2016 update: “Development is not for the faint of heart or shallow of pocket.

Between the end January and the end of July, only seven housing units priced at $500,000 or less sold in the entire city

“One cannot contemplate building virtually anything in the city without vehement opposition and sometimes a well-funded coalition in opposition,” according to the report. “For developers, the equation to be calculated out includes very high land and construction costs, increasing affordable-housing contributions required by the city, enormous hassle-factor and extended project timelines.”

But at least one faction in this famously fractious city applauds the plethora of pricey new homes, or any homes, for that matter: the San Francisco YIMBYS.

The Yes In My Back Yard faction was out in force at a recent hearing on whether San Francisco property owners should be able to build so-called accessory dwelling units – also known as granny flats or in-law units – an issue that has roiled neighborhoods like upscale, baby-filled Noe Valley.

Noe Valley is home to multi-million-dollar Victorians, and, as Sfgate.com puts it: “Merchants who cater to those looking for handmade Guatemalan textile products, upscale beauty products, or Eileen Fisher ensembles.”

Its residents have had much to grumble about in recent years: an influx of “monster houses” built by the well-heeled who buy, tear down and rebuild on lavish scale; a gaggle of Google buses and other shuttles that take techies to and from jobs in Silicon Valley.

The possibility of granny flats, which the city says could add up to 33,000 units to already existing housing, saw YIMBYs front and center at a July hearing that brought out the worst in everyone.

Sonja Trauss is founder of the San Francisco Bay Area Renters Federation, which the activist describes as “the increase capacity arm of the anti-displacement movement”.

“I want to remind everybody that not building displaces people,” she said at the hearing.

“I don’t really see any downside at all,” she said, “besides the fact that some neighbors might have to let their eyes pass over a new thing that looks different and unfriendly to them. We’re talking about places that people live, and I don’t think it’s worth it to save the way a house looks to deny someplace for someone to live.”

To which Monica McFadden, a self-described fourth generation San Franciscan whose children are “fourth generation Noe Valleyans”, replied: “We can’t allow one-person’s greedy wants to overshadow literally the quality of life of many.”

“I mean, what do we want this city to become?” McFadden fumed. “Do we want to see the end of backyard barbecues, water balloon fights, mud-pie making, home gardens and the ray of light for the elderly and housebound?

“This is not Manhattan.”