‘Give Us the Ballot,’ by Ari Berman – NYTimes.com
http://mobile.nytimes.com/2015/08/30/books/review/give-us-the-ballot-by-ari-berman.html 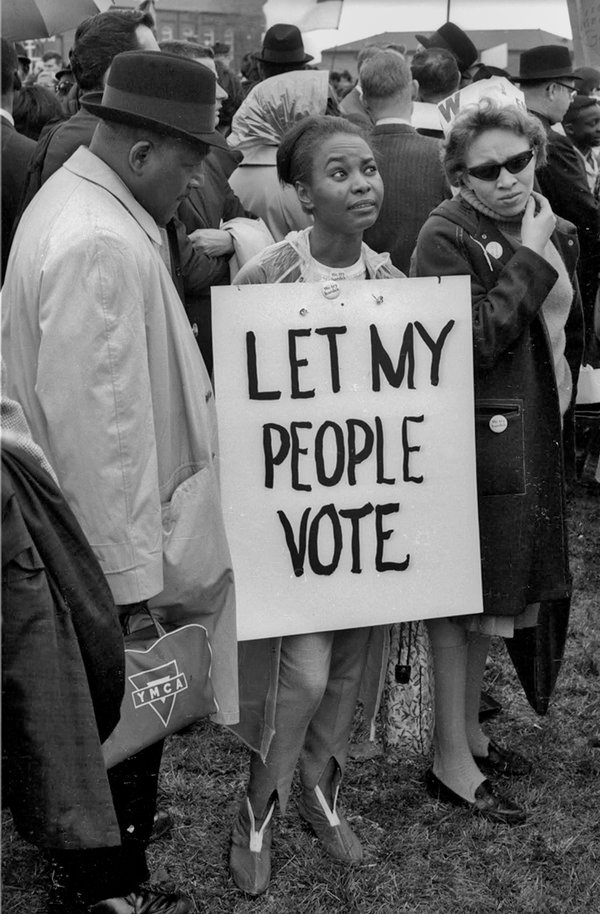 Fifty years ago, when President Lyndon B. Johnson signed the Voting Rights Act on Aug. 6, 1965, he felt, his daughter Luci said, “a great sense of victory on one side and a great sense of fear on the other.” According to Ari Berman, a political correspondent for The Nation, he knew the law would transform American politics and democracy more than any other civil rights bill in the 20th century, but he also feared that it would deliver the South to the Republican Party for years to come. Both predictions proved to be accurate. “The revolution of 1965 spawned an equally committed group of counterrevolutionaries,” Berman writes in “Give Us the Ballot.” “Since the V.R.A.’s passage, they have waged a decades-long campaign to restrict voting rights.” Berman argues that these counterrevolutionaries have “in recent years, controlled a majority on the Supreme Court” and “have set their sights on undoing the accomplishments of the 1960s civil rights movement.”

Berman’s claim that those he calls the counterrevolutionaries — including Chief Justice John Roberts — have set out to undo the accomplishments of the 1960s is, of course, contested. Still, Berman usefully explores how the debate over voting rights for the past 50 years has been a debate between two competing visions: Should the Voting Rights Act “simply provide access to the ballot,” as conservatives claim, or should it “police a much broader scope of the election system, which included encouraging greater representation for African-Americans and other minority groups”? Regardless of where you fall on this policy question, one historical trend is clear: Every time the Voting Rights Act came up for renewal, from 1969 to 2006, Republicans and Democrats in Congress and the White House repeatedly endorsed the broader interpretation. And the Supreme Court repeatedly responded by imposing the narrower interpretation by judicial fiat.

The initial success of the Voting Rights Act in increasing minority voter registration is striking and impressive: In the ­decades after Johnson signed the act, black voter registration in the South soared from 31 percent to 73 percent and the number of African-American elected officials nationwide expanded from fewer than 500 to 10,500. And in 1969 the Warren court, by a 7-2 vote, held that the act prevented Mississippi from adopting an at-large election system for county supervisors, since countywide elections were harder for minority candidates to win. But after Richard Nixon won the election of 1968 with a Southern strategy, he appointed four Supreme Court justices who took a less expansive view of the scope of the Voting Rights Act.

In a 1980 decision, the Burger court upheld an at-large election system in Mobile, Ala., on the grounds that both the 14th and 15th Amendments and Section 2 of the Voting Rights Act required evidence of an intent to discriminate against ­African-Americans. (Later, as Berman tellingly observes, a smoking gun emerged: a 1909 letter from a former Mobile congressman confessing, “We have always, as you know, falsely pretended that our main purpose was to exclude the ignorant vote when, in fact, we were trying to exclude not the ignorant vote but the Negro vote.”) Republicans and Democrats in Congress resolved in 1982 to overturn the Mobile decision with amendments to the act that restored the Supreme Court’s previous ban on voting changes that had a discriminatory effect. Conservatives in the Reagan administration lobbied against the amendments, including John Roberts, then a 26-year-old special assistant to the attorney general, who wrote more than 25 memos opposing them. “An effects test would eventually lead to a quota system in all areas,” Roberts wrote. Nevertheless, the Senate and the House restored the effects test by a nearly unanimous vote, and President Ronald Reagan signed the amendments, which he followed with a reception attended by Coretta Scott King.

Roberts’s prediction that the amendments to the Voting Rights Act would lead to demands for proportional representation for minorities proved to be accurate. But it was vindicated in an unexpected partisan twist that ultimately cost the Democrats the South, just as Johnson had feared. After George H.W. Bush’s election in 1988, his campaign manager, Lee Atwater, the new head of the Republican National Committee, decided to form what Berman calls “an improbable partnership with black Democrats in the South to overthrow the white Democrats who had controlled the region since the end of Reconstruction.” By interpreting the newly amended Voting Rights Act to require the creation of majority-black districts whenever possible, the Bush Justice Department, Atwater believed, could “siphon black voters away from adjoining white Democratic districts, making those districts whiter and more conservative.”

Interactive Feature | Book Review Newsletter Sign up to receive a preview of each Sunday’s Book Review, delivered to your inbox every Friday.

The strategy worked. In 1992, 17 ­African-American representatives were elected to Congress as Democrats from newly created majority-black districts, the largest minority class ever. But two years later, the Republicans gained 54 seats in the House and retook the chamber for the first time in four decades.

After the 2000 election, the Justice Department of George W. Bush decided to focus on voter fraud rather than on maximizing minority representation. Despite this shift in strategy, President Bush signed a sweeping, bipartisan reauthorization of the Voting Rights Act in 2006, once again passed by a nearly unanimous Congress, because he concluded — like Presidents Nixon, Ford and Reagan before him — that opposing the act would harm the Republican Party’s standing with black voters. Seven years later, on June 25, 2013, the Supreme Court, by a 5-4 vote, struck down the formula Congress had adopted in 1965 and renewed in 2006 for identifying jurisdictions subject to federal oversight. Chief Justice Roberts held that it violated the Constitution because of progress in black voter registration and electoral success. In her blistering dissent, Justice Ruth Bader Ginsburg said Congress, not the court, had the constitutional authority to define progress in voting rights. “Hubris is a fit word for today’s demolition of the V.R.A.,” she wrote.

In 2014, the first election since 1965 without the preclearance protections of the Voting Rights Act, voters in 14 states faced new voting restrictions adopted by mostly Republican legislatures, including a voter identification law in Texas and cutbacks on same-day registration and early voting in North Carolina. The Supreme Court allowed both laws to go into effect, over dissents from Justice Ginsburg. But because the new voting restrictions were arguably adopted to help Republicans rather than harm ­African-Americans, the Supreme Court may continue to uphold them on the grounds that the Constitution does not prohibit hyperpartisanship by legislatures. Berman notes that “the number of voters potentially affected by new barriers to the ballot box exceeded the margin of victory in close races for Senate and governor in North Carolina, Kansas, Virginia and Florida, according to the Brennan Center for Justice.”

“Give Us the Ballot” is an engrossing narrative history rather than constitutional analysis. Berman does not explore why justices who are devoted to the original understanding of the Constitution have repeatedly voted to narrow the scope of the Voting Rights Act with the argument that the equal protection clause of the 14th Amendment is colorblind. (In fact, as Justice John M. Harlan observed in his 1964 dissent from one of the original Supreme Court decisions regarding “one man, one-vote,” the framers of the 14th Amendment believed that the equal protection clause did not regulate voting or apportionment at all.) Still, Berman vividly shows that the power to define the scope of voting rights in America has shifted from Congress to the courts, a result that would have surprised the Reconstruction-era framers.

GIVE US THE BALLOT

The Modern Struggle for Voting Rights in America