Eggs That Clear the Cages, but Maybe Not the Conscience – NYTimes.com
http://mobile.nytimes.com/2016/07/17/business/eggs-that-clear-the-cages-but-maybe-not-the-conscience.html 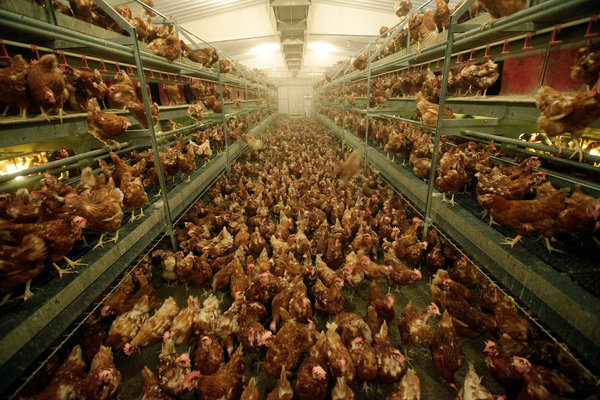 American hens produce more than 83 billion eggs a year. Most hens — more than 285 million in all — are housed in cages not much bigger than a shoe box. Stuck in one of these so-called battery cages, a hen might live her whole life without seeing the sunlight, let alone stretching her wings.

Pressure from animal rights activists has led many of the biggest food companies in the country to commit to what are being described as more humane alternatives. In recent months, Walmart, Costco, McDonald’s and others have pledged to transition to buying only cage-free eggs in the years to come.

That is music to the ears of the people who have campaigned against conventional battery cages. Yet while industrial cage-free systems may improve the quality of life for some hens, research suggests that they can also introduce health and environmental problems.

“The world is changing,” said Wayne Pacelle, president of the Humane Society of the United States. “There is this rising tide of consciousness about animals, and people are starting to realize that they have feelings and lives that matter.”

All told, more than 175 major retailers and restaurants have committed to switching to cage-free eggs. Together, they account for more than 90 percent of the domestic egg market.

A big change is underway. But raising a hen in a “cage free” environment doesn’t mean it will live in a bucolic setting, pecking for bugs in a great green field.

Instead, the most common large-scale cage-free alternatives are so-called aviaries in which hens roost in close quarters, with row upon row stacked high in enormous barns. A critical difference is that they can move around. And in many aviaries, hens have access to outdoor space, though it is often small and hard to reach.

Though Mr. Pacelle said aviaries were “not perfect,” he said he believed they represented a vast improvement over the status quo. “It does not conform to our ideal of an animal running freely and pecking at the dirt and eating insects and being warmed by the sun,” he said. “But aviaries are dramatically better than the conventional barren battery cages.”

All that newfound freedom can introduce health risks for hens, workers and consumers. The Coalition for Sustainable Egg Supply, a group of animal welfare scientists, academics, egg farmers and big companies, recently released a report documenting several troubling aspects of aviary systems. (The group is backed both by egg producers, which have little incentive to change their ways, and food companies that have pledged to go cage-free.)

Perhaps most troubling, “hen mortality was much higher in the aviary system,” the report said. When hens move around more freely, it is easier for them to spread germs. And hens in cage-free aviaries were also more aggressive than their cage-bound peers, pecking at one another and, in some instances, becoming cannibalistic.

Aviary-raised hens had less foot damage but dirtier feathers. One of the main causes of death among hens, hypocalcemia, or low blood calcium levels, was most prevalent in aviaries.

Conditions for workers and the environment were also worse. Ammonia concentrations, dust levels and particulate matter emissions were higher in aviaries than in conventional battery-cage systems.

“When birds can run around, they can also stir up more particulate matter in the air,” said Darrin Karcher, a poultry extension specialist at Michigan State University and a researcher for the Coalition for Sustainable Egg Supply.

The report also found that farmworkers in aviaries exhibited worse short-term respiratory health. “Gathering floor eggs in the aviary required them to adopt extreme body positions for extended periods and exposed them to multiple respiratory and ergonomic hazards because they had to crawl and lie on the floor,” it said.

In short, liberating hens from cages — and holding them in aviaries — doesn’t necessarily make them, or the workers who handle them, any healthier. Yet Big Food’s embrace of cage-free eggs has been remarkably thorough and swift.

What’s more, the shift seems largely driven by businesses, not by consumer tastes, or at least not yet. Cage-free eggs account for less than 10 percent of overall egg sales each year, and demand isn’t growing especially fast. Instead, the corporate world appears to be trying to get ahead of a problem before many consumers push for change.

Companies like Target, Denny’s and Unilever would like consumers to believe that they developed a conscience overnight, and perhaps they have. More likely, they decided it was better to hop on the cage-free bandwagon now and accept extra costs, rather than be caught flat-footed later and face reputational damage.

There’s no doubt that some people, and a growing roster of companies, want eggs to come from hens that have been treated well. But it’s not clear that the industry has figured out how to do that.

“The science does not support the overall decisions that are being made in the marketplace,” Mr. Karcher said.

Battery cages and aviaries aren’t the only ways to house egg-laying hens. So-called pasture-raised hens fit many people’s ideal of happy chickens on Old MacDonald’s Farm. They can roam in the sun, peck for insects in the dirt and roost in roomy nests. But pasture-raised eggs are more expensive than those from hens raised in cages or aviaries, and pastures require a lot of space. Satisfying America’s voracious egg appetite this way would require a farm bigger than the state of Massachusetts.

Another option is the so-called enriched colony — essentially a big cage that holds about 60 hens at a time. Here, hens can stretch their wings and move a bit. They also produce moderately more eggs than those in aviaries or battery cages, and are cheaper and have lower mortality rates than aviaries, according to the report. But enriched colonies are enclosed, not cage-free, and therefore don’t satisfy the new requirements set by America’s largest egg buyers.

The problem may be more fundamental. Producing billions of eggs a year is an inherently messy business. Just 200 or so farmers control almost all of the nearly 300 million egg-laying hens in the United States. Pasture-raising that many hens is not feasible, so big farmers need big industrial systems to meet demand. And while cage-free aviaries may let hens stretch their wings, they’re not necessarily better for the health of the animals, or the workers.

If shoppers really want to buy eggs and have clear consciences, they may need to pay extra for pasture-raised, organic eggs, which can cost two, three or even four times as much as conventional eggs. Anything less than that means buying into an industrialized system of mass egg production, be it conventional or cage-free.

“It’s the nature of the system itself that is problematic,” Mr. Karcher said.