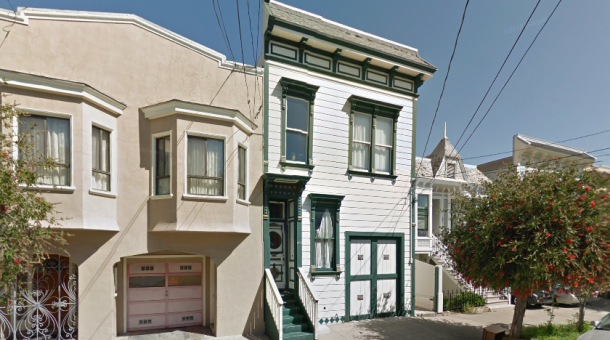 Michelle Malliett’s two-bedroom in-law unit is on the lower level of the main house (right), with its own entrance in the rear. Since 2007, she has paid $1,700 a month to live there with her daughter.

One chilly afternoon in March, Michelle Malliett came home to her Mission district apartment to find a legal notice taped to her door. The notice gave her three days to move out of her two-bedroom apartment, an illegal in-law unit that she shares with her 17-year-old daughter. Her reaction? “I panicked,” she recalls.

Malliett, 49, is a single mother who holds down two part-time jobs, as a teacher’s aide for special-needs kids in the mornings and as a kindergarten teacher in the afternoons. Since 2007, she had been paying $1,700 per month for the lower level of her landlady’s Victorian, but in March the property sold—for $1.3 million—to a couple who work in tech. When Malliett read the notice, she knew that she was in trouble: $1,700 just wouldn’t go far in the modern-day Mission, nor anywhere in the city, even if she had more than three days to find a new home. “I feel like a dog gets more notice to be out of somewhere than I did,” Malliett says. “They treated me like I was a dog.”

Though S.F. has proven to be an inhospitable place for renters the last several years, the circumstances surrounding this eviction are particularly startling. It seems that Malliett’s new landlords—Mathieu Verbeeck, a VP of product development at Mubi, and Catherine Crevels, a marketing manager at Intuit—are testing out a novel strategy for ejecting tenants. They contend that Malliett and her daughter are causing a “nuisance” by living in a unit that lacks the proper permits. The Board of Supervisors has already blocked landlords from evicting tenants of illegal units simply because they are illegal, but here the owners are taking a different approach—one that tenants’ rights advocates are concerned will create a worrying precedent.

“This is the first time we’ve seen a tenant accused of nuisance for living in an illegal unit,” says tenant rights attorney Joseph Tobener, whose firm is representing Malliett. And what, pray tell, is the nuisance cited in the legal notice? “Defendant’s usage of gas or electrical appliances is dangerous.” That’s right: Only in San Francisco do you stand to lose your rent-controlled apartment for boiling water.

Jonathan Bornstein, the attorney representing the landlords, says that “this is not the heartless situation it seems.” It’s just that his clients don’t want to be responsible for an illegal situation of someone else’s making. Asked if a building or code inspector has found a problem with Malliett’s unit, he said yes, but would not specify what the defect is because of the ongoing legal dispute. “She should be angry at the former owner who did this to her,” Bornstein says of the unspecified defect.

According to the house’s entry in the city’s Property Information Map, there are no reported violations of Planning or Department of Building Inspection code. Asked whether she’s noticed any problems with her unit, Malliett texts back, “Just that the building is 116 years old. But no, I don’t consider it dangerous.” Robert Collins, acting executive director of the San Francisco Rent Board, is skeptical of the landlords’ focus on the in-law unit’s compliance. “It seems drastic to go after someone on an at-fault basis,” he says. “The landlord would have been, one would expect, completely aware of what they were buying. If not, they should be going after the old landlord if they were deceived into thinking this unit was compliant.” (Indeed: The presence of illegal rooms was plainly stated in the house’s online listing, which warned that “not all rooms are warranted.”)

There are an estimated 30,000 to 50,000 units in San Francisco that aren’t up to code. Tobener believes that if Malliett’s landlords prevail, “it’s an easy way for tenants to be evicted.” If they don’t prevail, Verbeeck’s and Crevels’ legal strategy could still have a chilling effect on tenants’ rights. Even when eviction attempts are unfounded, they can displace tenants simply by being expensive to fight, says Dave Crow, a tenants’ rights attorney who is not involved with this case. “You may have rights, but if you don’t have the dough to assert those rights, forget it,” he says. “If we were to opt for [Malliett’s lawyer’s] approach, the tenant’s going to be in to us for $10,000 to $12,000 right now, probably more.”

Because of the cost of fighting, tenants’ victories are often pyrrhic, says Tobener: “That’s why a lot of tenants give up when they get bogus notices like this. It wipes out their resources.” Plus, most tenants who fight won’t be able to recover their attorney’s fees, because a landlord’s—or anyone’s—right to file a lawsuit is protected in California.

If Malliett’s landlords are uncomfortable with owning an illegal unit, there are a number of well-trodden solutions. The Planning Department offers owners a path to take illegal units out of service. But as of April, they need a conditional-use permit to do so—a process that puts the onus on landlords to bring illegal units up to code when it’s feasible. Asked whether his clients had considered making the illegal unit legal, Bornstein says, “They’ve chosen not to do that.” He adds, “They didn’t buy the house to become landlords. They bought a single-family home to live in and enjoy themselves.”

Of course, there’s a path for that, too: the Ellis Act, which usually gives tenants 120 days’ notice and would result in a relocation payment of $11,788 for Malliett and her daughter. Why not go the Ellis route? “It takes a period of time, and my clients have to live with this danger all the time,” says Bornstein. He adds: “For various reasons that are confidential, this is the route they chose.”

For now, Malliett and her daughter are in limbo as they fight their legal battle challenging the eviction. Malliett is worried about finding a new place that will allow her dog. “It doesn’t matter if it’s an emotional support animal,” she says. “Nobody wants a dog.”