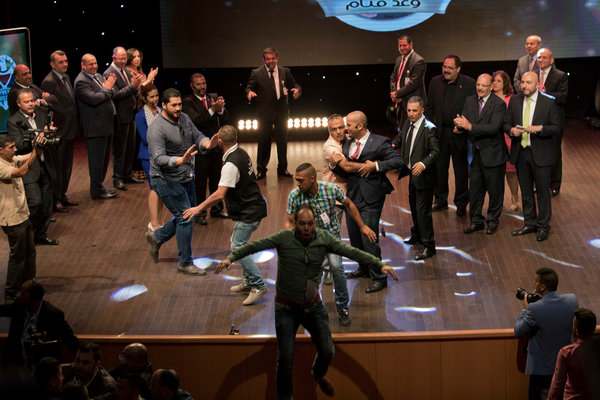 JERUSALEM — “Mr. President!” a woman called out to Waad Qannam at a rally last week in East Jerusalem. “We want you to represent us!” The crowd cheered passionately, even though Mr. Qannam was actually running for president on a reality television show.

In the United States, a reality television star is the presumptive Republican presidential nominee. For Palestinians, it’s the other way around: A candidate chosen on a television show is the closest they have come to an elected leader in more than 10 years.

“This is just a show,” acknowledged Mr. Qannam, one of three contestants who made it to Thursday night’s finale of “The President.” “But people are hungry for a leader.”

The show, now in its second season, began with 24 contestants culled from more than 1,200 applicants who had to take a series of exams on Palestinian politics, international law, development and gender equality. Each week, contestants shadowed a Palestinian minister or business person, then told a panel of judges what they had learned and how they would improve on the job.

They also held election rallies while cameras were rolling and had to campaign for votes from the audience, who voted via text message at 80 cents a pop. A mix of votes from judges and the audience determined who made it to the next rounds, though in the finale only audience votes counted. Because there was no cap on how many times viewers could vote, money played a considerable role, and candidates raised funds to secure votes from viewers.

On Thursday night, the three finalists all had similar platforms: Boycott Israel. Designate East Jerusalem as the capital of Palestine. Bring about a reconciliation for the bitterly divided Palestinians between the West Bank and Gaza. (Six of the candidates in the round of 24 were from Gaza, though none made it to the final round.)

Mr. Qannam — Muslim, male and from East Jerusalem — was the leading candidate. Studying to be a lawyer, Mr. Qannam, 24, is the son of refugees, broadening his appeal in the hardscrabble camps across the West Bank. His mother is a deputy minister of Jerusalem affairs in the Palestinian Authority. And he had a nice smile.

The only female finalist, Nemah Adawiah, 22, studies international relations at Birzeit University near Ramallah. She drew some resentment because her wealthy family was bankrolling her campaign, and scrutiny about her appearance when the judges deemed some of her colorful outfits inappropriate.

The third finalist, Fadi Khair, a 35-year-old Christian and pediatric nurse, had backers who felt he needed to broaden his appeal to Muslim voters. “You need a priest and a sheikh to sit in the front row,” mused a friend at a campaign meeting before Thursday’s finale.

“The President” — broadcast on the Maan satellite network to large audiences in Gaza, the West Bank and elsewhere in the Arab world — was funded mostly by a State Department grant to Search for Common Ground, a nongovernmental group that focuses on conflict resolution.

Suheir Rasul, the group’s co-director, said the point of the show was to groom young Palestinians to be future leaders. Yet the subtext was aimed at the Palestinian Authority president, Mahmoud Abbas, who is now 11 years into what was meant to have been a five-year term and has offered no signs of handing over power.

In an odd twist, many judges on the show were Palestinian officials, and the Palestinian Authority allowed its organizers to use their facilities. Advisers to Mr. Abbas did not respond to requests for comment on the show.

The show is “a message for the Palestinian leadership,” said Raed Othman, Maan’s general director. “Elections are the solution. Democracy is the solution.”

Before the finale, Mr. Khair, the pediatric nurse, was deeply worried about how to raise enough funds.

“We focus on the rich, not the poor, because they barely have enough for their daily bread,” said his mother, Hannah Khair, before the finale. They were focusing on people in his hometown, Beit Sahour, a village in the West Bank, and Christians excited to see one of their own vie for president.

Ahead of the penultimate episode, he spent about $7,800 to secure nearly 10,000 votes. As he prepared his speech for the final episode, Mr. Khair estimated he needed to secure at least 20,000 votes to have a chance at winning.

“I want to talk about economic resistance,” he said. “A call for foreign investment and Palestinian investment,” he said, but was interrupted by his wife, Mirna, 25, holding their 3-year-old son, Jihad, as he vomited on the kitchen floor.

Mr. Khair continued while helping his wife. “I’ll talk about diplomacy,” he said.

Ms. Adawiah’s family took care of nearly everything. Her father, Bahjat Adawiah, 72, organized her election rally on a recent night in Al Ram, a neighborhood near Jerusalem, tucked behind Israel’s separation barrier, where he owns several properties.

“I am the daughter of Jerusalem!” she read, practicing her speech. Her father paced and chain-smoked. “Speak more forcefully!” he told her. “She wants to win, so I have to support her. She’s our little spoiled girl,” he added, grinning.

But the show’s producers noted that Ms. Adawiah had worked extremely hard and impressed the judges. Money alone could not have propelled her to the finale, they said.

Her father’s business partners, Al Ram’s mayor and other prominent residents piled into a school hall, where her rally underscored women’s participation: There was a female master of ceremonies, and a women’s folkloric dance troupe entertained guests.

“We want you to be the president, and why not?” said Ali Maslamani, the mayor. “Our long Islamic history is filled with female leaders!”

But Mr. Qannam was clearly the most popular candidate.

In an East Jerusalem soccer club on a recent night, he barely got through his platform before residents began endorsing him.

Mustafa Shabani, a 23-year-old who works two jobs to support his family, said he had spent at least $7 on votes for Mr. Qannam.

Mr. Othman, the general director of Maan, said the influence of money made the show more realistic. “You can sit in a cafe and have a great idea — but so what?” he said. “Show me the money.”

During Thursday’s finale in a Ramallah studio, Mr. Khair stumbled through his speech. Ms. Adawiah laced hers with religion and nationalism. “It is time to change what is inside ourselves, so we can change our sick reality,” she said.

In the end, though, it was Mr. Qannam’s night.

“You are standing before an important decision!” he told the audience. He promised his first act as “president” would be to visit Gaza and heal a decade-old rift between Palestinians. “I will reconcile our nation!”

“Were it not that I loved this homeland, I would not have done this,” he said. “This is a duty, not an honor!”

Mr. Qannam won with nearly 42,000 votes, compared with roughly 28,000 for Ms. Adawiah and about 14,000 for Mr. Khair. His prize? A car, plus the prominence and political connections that come from being on the show.

He struggled to speak over the ecstatic audience. “This is not my victory!” he called out. “It is a victory for Palestine!”

Nearby, that victory was hard to stomach. Ms. Adawiah’s family alleged that organizers had falsified the tally, arguing they had receipts for 41,000 votes they had secured for their daughter.