The whole world is talking today about the Panama Papers, the amazing leak of documents from a law firm that specializes in helping the rich hide their money. Leaders of numerous countries are involved. Vladimir Putin is a player. The prime minister of Iceland may have to resign. The government of Pakistan is caught up in the scandal. And there will be a lot more as investigative reporters continue to dig through the terabytes of data.

So far, none of my top corporate and political bad guys are on the list – no Donald Trump, no Koch Brothers, no Ron Conway (and my list goes on and on). But it’s clear that there’s a connection between all of this shadowy money and San Francisco. In fact, there’s a connection to the SF housing crisis.

On NPR this afternoon, the vice president of Transparency International talked about how the offshore deals impact ordinary people – and the first thing she talked about was housing in cities like New York and SF. See, the shadowy banking system allows people with illegal money – money from arms trading, money from drug sales, money stolen from the people of a struggling country – to launder it and use it, among other things, to buy real estate.

So, she said, the bidding wars that are driving up the cost of housing in cities, and the mega-priced condos that are shoving out other types of housing in places with scarce real estate, are directly linked to this dark money.

The Miami Herald documented this nicely.

Money from people linked to wrongdoing abroad is helping to power the gleaming condo towers rising on South Florida’s waterfront and pushing home prices far beyond what most locals can afford.

The Herald had access to the documents, as part of the international team of investigative reporters that catalogued and analyzed the records. Nobody from SF was on that team, so we don’t know yet exactly how many of the high-end condos that are squeezing out more modestly priced housing are funded by corrupt money.

But it would be completely insane to believe that all of that new housing that the mayor is praising is being built without some of this illegal, secretive cash. It’s happening in every other major city, and it’s happening, probably faster, here.

We know that a lot of the luxury condos going up are not occupied by people from San Francisco, and that in fact a lot of them aren’t occupied at all. They are places to hide money.

And now we know they are places to hide illegal money.

So let’s stop arguing that all of this new high-end development is helping the housing crisis. It’s not. But this type of development is almost certainly helping some very nasty characters bring their wealth ashore in quasi-legal ways.

And if you think that city planning has anything to do with what’s getting built in San Francisco, check out today’s Chron story on hotels. The Planning Department never decided that the city needs more commercial hotel rooms; maybe it does, maybe it doesn’t, but that was never discussed at a commission meeting. There was no public debate over whether hotel rooms are the best use of very scarce land in places like Soma. 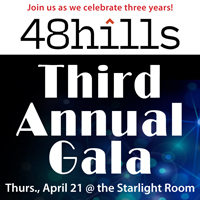 In San Francisco, the city doesn’t really plan; it responds to what the international capital markets – which, we are reminded today, are often deeply corrupt and venal, want to do.

That’s a key reason we have a housing crisis: We trust in the private market, and the developers who exploit it, and the investors who get rich off it, to solve the problem. It’s never worked in SF, and it never will.

I would love to see the city investigate how much of the new housing we so gleefully allow and the mayor so proudly supports is being purchased by crooks and dictators, and how much of that money has come out of the pockets of poor people the world over.