Only One Trump Thug Has Ever Been Charged for Assaulting Protesters 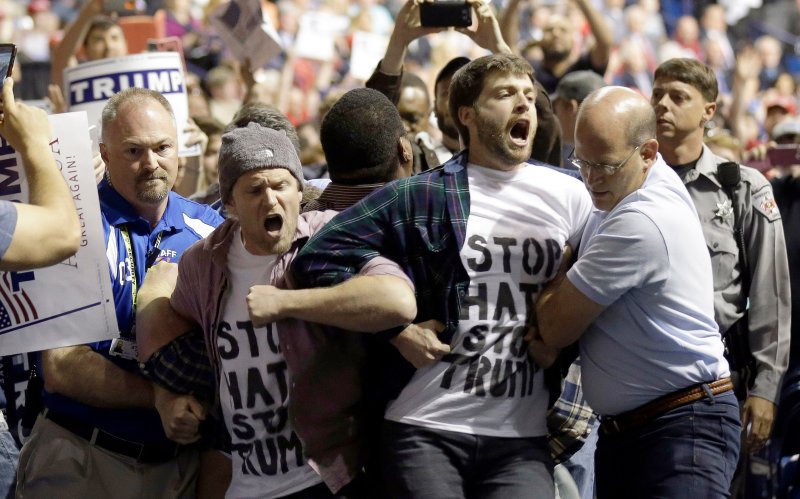 Donald Trump pledged last month to pay the legal fees of any of his supporters who rough up protesters and now he may have to pony up.

It will take $250 to spring John McGraw, the Trump fan who cold-cocked a black protester at at Trump rally Wednesday night in North Carolina, from the Cumberland County Jail.

“Next time we see him,” McGraw said minutes after the attack, “we might have to kill him.”

Surely Trump, with all his billions can afford to post McGraw’s bail. McGraw is the first Trump supporter to be charged with a crime for getting violent, but he is not the only one who has assaulted protesters in the name of Trump.

Here is a list of the more egregious physical attacks on those who have dared to protest Trump, which does not include the Time photographer chokeslammed by security last month, or Trump campaign manager Corey Lewandowski, who allegedly bruised Michele Fields of Breitbart News. None of the instances listed below have resulted in arrests of the Trump supporters who have carried out the attacks.

October: Immigration rights activist Ariel Rojas is pulled out of a campaign event in Doral, Florida by Trump supporters. A sign reading “Equality” was ripped from Rojas’s hands and was dragged from behind by a Trump supporter. (Rojas hit the ground hard but was able to walk out under his own power.) A Doral police detective told The Daily Beast on Thursday he wasn’t aware of charges ever being filed—despite the fact that the attack, again, was captured on video. The detective mused that the incident may have been handled “internally, by Trump’s security people.”

November: Mercutio Southall is pushed to the ground in Birmingham, Alabama and claims he was punched when he showed up wearing a Black Lives Matter shirt. Southall’s attorney told The Daily Beast in November that his client suffered a mild concussion and would be looking into filing hate crime charges after Trump’s supporters called him a “nigger” and a “monkey” while he was being escorted out by police. While Southall was being attacked, Trump told the crowd, “Get him the hell outta here, would you please?” The Birmingham Police Department said it wouldn’t pursue charges on its own because the attack appeared to qualify only as a misdemeanor. Southall told The Daily Beast on Thursday that he and his attorney met with Birmingham police, but as of yet no charges have been filed against those responsible for the attack.

January: Two men in Lowell, Massachusetts were sitting quietly at a Trump rally have their signs (“America Already Great” and “God Bless President Obama”) torn up. The men continue to sit peacefully as the crowd around them becomes rowdy. Eventually, a police officer arrives to escort the men out, while ignoring the people around them who ripped up the signs. A chant of “USA, USA, USA!” closes out a video of the incident.

March: A black woman is shoved by several protesters, one of whom, Matthew Heimbach, was later revealed to be a “white nationalist” known as The Little Fuhrer. Video shows the protester at the Louisville, Kentucky event walking down a gauntlet of Trump supporters, all yelling for her to leave while Heimbach follows closely behind. Molly Shah, a protester also at the rally has filed a complaint against Heimbach, who she claims punched and kicked her when she held up a sign reading, “Black Lives Matter.”

Esmeralda and Zayra Barragan say they were assaulted by an unidentified man at the same Trump rally. Like Shah, the Barragans have also filed a complaint with the Louisville Police Department. At some point during the alleged attack, the aggressor turned toward the daughter and told her, “You will never be anyone.”

Trump is scheduled to speak at the University of Illinois at Chicago pavilion on Friday, which holds approximately 7,000 people. Hispanic leaders, including Rep. Luis Gutierrez, will hold a counter-rally outside the pavilion. Thousands of protesters have pledged online to attend.