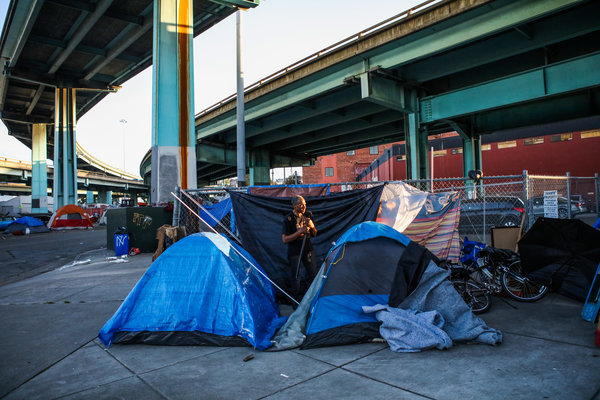 SAN FRANCISCO — An order by the San Francisco authorities to vacate a sidewalk tent camp in a commercial district has rekindled passions over the city’s longstanding homeless problem, which residents say has reached crisis levels.

Some inhabitants of the encampment near a Costco and car dealerships say they will defy the city’s order to disperse by Friday, forcing a dilemma for San Francisco’s municipal government, which has until now sought to use gentle persuasion in its dealing with the large homeless population.

“I kind of want to stay put and fight it out,” said Elizabeth Stromer, a 45-year-old former nurse who lives in a tent not far from a BMW dealership on the edge of the city’s Mission District. She described the standoff as a “personal battle” between the homeless and the administration of Mayor Edwin M. Lee.

The city targeted 50 tents under a highway overpass — which shelter a small fraction of the more than 6,000 homeless people in the city — because of what it called the “accumulation of garbage, human feces, hypodermic needles, urine odors” and other unsanitary conditions.

The encampment “is hereby declared as a public nuisance,” the city’s Department of Public Health said in its order.

For years the homeless have been fixtures in neighborhoods across San Francisco, a jarring contrast to the tremendous wealth generated by the technology boom.

City officials say the problem has become more visible as real estate development in formerly rundown areas has pushed the homeless to the doorsteps of the city’s more affluent neighborhoods.

San Francisco, where average office rents are now higher than in Manhattan, has seen housing costs skyrocket in recent years.

Malia Cohen, a member of the San Francisco board of supervisors, the city’s legislature, said that homelessness had reached a “crisis point.”

At a passion-filled hearing on Thursday at San Francisco’s City Hall, both homeless and homeowners made impassioned pleas to legislators to resolve the issue.

A security guard was summoned when a homeless man who identified himself as Hector Torres took to the lectern and screamed that he had been thrown out of a shelter “like a dog.”

“I couldn’t even take a shower to come over here!” he yelled.

Mary Ann Mills, a San Francisco resident who described herself as a retired senior, told the hearing that her neighborhood had become unlivable.

“I can’t walk out my door,” she said. “We can’t keep the trash out of our area. I can’t walk my grandson down the street.”

Residents criticized the city government for giving tax breaks to technology companies like Twitter while not providing enough low-income housing. One woman said San Francisco had become “the most unequal city in the United States right now.”

The owner of a vintage clothing shop, James Spinella, said that his shop and his home had both been broken into recently and that he had called the police when homeless people in his neighborhood began fighting with “chains and knives.”

“This past year has been absolutely horrible,” Mr. Spinella said in an interview after the hearing. “It’s the worst that anyone can remember over the past 20 years.”

Like many San Franciscans, he faulted the way the authorities have handled the growing problem, which is highly visible and startles tourists and residents alike. “The city has allowed this to get so extreme,” Mr. Spinella said. “They are harboring criminals — it’s not just a homeless situation anymore.”

The San Francisco Police Department did not immediately respond to a request for data on property crimes, but many residents report a steep increase in car break-ins.

The administration of Mayor Lee has increased the budget for homeless-related spending by $84 million over the past five years, to $242 million this year. More than half of that money is spent on housing for homeless families and programs that prevent evictions.

“It seems like a lot of resources, but it’s very limited in terms of the size of the need,” said Sam Dodge, an official in the mayor’s office charged with overseeing the homeless problem. Mr. Dodge, who spent six years working in the New York City Department of Homeless Services — which has a budget of more than $1 billion — said New York had a “vastly more resourced system.”

San Francisco offers free bus tickets out of the city to homeless people who are from out of town, checking first to make sure they have someone waiting for them at their destination. And over the past year, officials have sought to make some shelters more attractive by doing away with curfews, providing storage for belongings, allowing couples to sleep in the same bed and providing facilities for pets.

Dr. Joshua Bamberger, a physician and an expert on homelessness as the University of California, San Francisco, said that 15 percent to 20 percent of the homeless who sleep on the streets of San Francisco were mentally ill and that the city should focus efforts on housing them.

“We are not prioritizing our dollars toward the people who are sick,” he said.

Dr. Bamberger treats homeless people as part of his practice. “To watch mentally ill, medically frail seniors walk out of my office, knowing that they are going to be sleeping in the rain in San Francisco is heartbreaking,” he said. “It’s completely unacceptable in an advanced society.”

Also included among the city’s homeless population are drug users attracted by the city’s lax law enforcement and those drawn to California for its milder weather and the notion that the state is an El Dorado of job opportunities.

In persuading the homeless to leave the streets, the San Francisco authorities face a mixture of mistrust and defiance from its homeless population.

Ms. Stromer, the former nurse, said she tried to get into one of the city’s homeless shelters but became disillusioned when her belongings went missing. When registering to enter the shelter, she handed over a silver locket for safekeeping that contained some of the cremated remains of a daughter who died in a car accident.

The administrators of the shelter lost a wooden box that contained the locket, she said.

“No one could figure out where it went.”

Ms. Stromer blames alcoholism for her slide into homelessness, and even though she has now quit drinking, she cannot envision returning to a more stable life.

“You can bounce back,” she said, “but you can’t erase the past.”