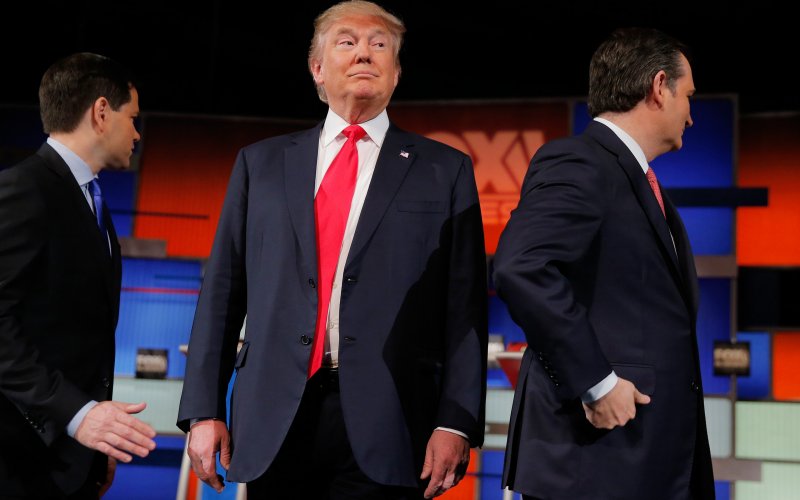 A few months ago I wrote that Donald Trump was probably going to withdraw before the Iowa caucuses rather than face the embarrassment of defeat. Wrong. He did lose Iowa, seemed momentarily humbled, but then quickly reverted to form by asserting that he really won. He went on to a landslide victory in New Hampshire and now leads in South Carolina.

While much of the political world speculates that Trump may be creating a new kind of candidacy largely immune to normal attacks, let me make another assertion (that may prove as wrong as the previous): Donald Trump should be easy to defeat. What makes him not a “normal” candidate actually makes him more vulnerable rather than stronger. Let me explain.

In a Republican primary, Trump lacks both an ideological or geographic base. For all the focus on his bigoted remarks about Mexicans and Muslims, Trump has won self-identified moderate voters in both Iowa and New Hampshire. In Iowa, he lost conservatives and very conservatives but won them in NH (in a landslide victory like he had in NH, it’s hard to win everything.) In a party that is increasingly dominated by the South and Sunbelt, Trump lives on Fifth Avenue.

Like a lot of things in life, this is a strength until circumstances change and it becomes a weakness. Think of Trump as a highly leveraged asset, say a stock or a home. As long as it continues to rise in value, borrowing on that asset to buy other like assets is hugely profitable.

But when it starts to go south, welcome to the world of the Big Short. What Trump lacks as a candidate is a fundamental value proposition. There is no real reason for moderates to support the candidate who labels Mexicans “rapists” and wants to impose a religious test on those boarding airplanes in Toronto to fly to Chicago. Nor is there a reason for conservatives to support a man who is a casino executive, defended partial birth abortion, and agrees with Michael Moore on the Bush Administration. And saying he’d like to date his daughter if she wasn’t his daughter is skin-crawling creepy. The Upper East Side is full of wealthy men with much younger wives who are a lot like Donald Trump. They just don’t win Republican presidential primaries.

Then there is the image of Trump as a business success. This should be subjected to the old Letterman watermelon treatment and dropped from a high floor to see what happens when it hits the sidewalk. There’s the simple stat that if he had taken his inheritance and invested in stock index funds he’d be much wealthier, a handy way to illustrate that he has underperformed the American average.

And there are specific failures, like his spectacular flop in Mexico. This is the man who claims that he can get the Mexican government to pay billions for a wall but couldn’t even build a Mexican resort? Plus the four business bankruptcies. Like no other candidate, Trump defines his candidacy and his own self-worth by his net worth. If ever there should be someone eager for the world to see how rich he is, that’s Donald Trump. Yet he refuses to release his tax returns. Why? It’s not modesty.

When he’s not talking about how rich he is, Trump loves to boast about his high IQ. This falls into the category of proving the opposite in assertion. Do NBA centers feel the need to point out how tall they are? There’s no reason to believe Donald Trump has anything but a mediocre mind and more reason to put him in the category of one of his favorite words, “dummy.”

He has proven to know less about foreign affairs than Al Sharpton when he ran for the Democratic nomination in 2004. It’s a joke when a candidate says he preps for foreign affairs by “watching all the shows,” as Trump did on Meet the Press; it’s pathetic when a candidate doesn’t even get the joke. After hammering Barack Obama for not releasing his birth records, Trump refuses to release his supposedly high IQ tests or his college transcripts. Again, modesty?

Lastly Donald Trump, like no presidential candidate in memory, responds to every charge and accusation. This is a huge advantage for an opponent. As Lyndon Johnson once famously said after accusing an opponent of having sex with a pig, “I just want to hear the son of a bitch deny it once.” One of the long established keys to success in politics is message discipline and constantly being drawn off message to respond to accusations is the surest way to lose any focus.

Boil this all down into a communications plan and it looks something like this:

* Commit to attacking Trump until he is defeated. This is key. It’s impossible to beat an opponent with a lead and ability to respond in media without a full-scale effort. No jabs or quick hits. The candidate and campaign must be focused on engaging Donald Trump until he is driven from the field. Risky? Not really. He’s winning and you’re losing. Beat him and you win.

* Control the pace: Trump is accustomed to existing in a comfortable world of his own design. He campaigns at a leisurely pace and has little of the support staff of a normal presidential campaign. To beat Trump, a campaign must take him out of his comfort zone and make him respond on your terms and timetable, not his. Like a hurry-up offense in football, attack Trump in rapid bursts with new, specific charges. Accelerate the pace. Keep him responding and don’t let him regroup. After his stumble in Iowa, campaigns inexplicitly failed to pressure him and he regrouped for the NH win. Don’t make that mistake again.

* Make defeating Trump a cause: if Donald Trump wins, the conservative party will be represented by a Manhattan trust fund liberal with three wives and four bankruptcies who boasts that what’s important is having a “young and beautiful piece of ass,” who loves Canada’s government-controlled health care, and who ridicules the American military as “never winning.” If Trump is what Republicans stand for, the party has walked away from every fundamental value.

* When Trump responds, hit him harder and escalate the charge. It’s not just that Donald Trump doesn’t share the values of most Republican primary voters; it’s that Trump is a disgrace. We’ve all seen how Trump responds to pressure, and it’s never pretty. A faulty microphone at a rally in Pensacola, Florida, sends him off on a rant. Predictable questions from Megyn Kelly drive him from the debate stage. This is someone who is accustomed to being treated with respect by unctuous underlings. Treat Donald Trump with the respect he deserves: none.

Ultimately Donald Trump with his tanning goggles cartoon persona and paper-thin ego is a silly person who has stumbled into a serious pursuit. The campaign that takes him on and beats him will grow in strength and likely win the nomination. It’s not hard but no one is trying. Have at it and win.