Norway tries a novel tactic for drug addicts—rehab instead of jail – Quartz
http://qz.com/617212/norway-tries-a-novel-tactic-for-drug-addicts-rehab-instead-of-jail/

In the US, almost half of federal prisoners are in jail for crimes related to drugs (pdf); almost a fifth committed their crimes to obtain money for drugs. Norway is trying to take a different approach to the problem.

Norwegian courts now have the power to sentence convicted drug users to rehabilitation (link in Norwegian), instead of sending them to prison. The narkotikaprogram was first trialled in the cities of Oslo and Bergen in 2006. It gave drug users the choice to avoid prison by signing up for treatment. A multidisciplinary team, which includes experts from education and specialist health services, was brought in to tailor the treatment to each individual drug user.

“As the evaluation shows that the pilot project regarding the drug program has been successful in Oslo and Bergen, Norwegian authorities want the program to be available in the whole country,” a spokesperson from Ministry of Justice told Quartz.

Norway has one of the highest proportion of people dying from drug overdose in the European Union, with 69.6 for every million inhabitants, second only to Estonia: 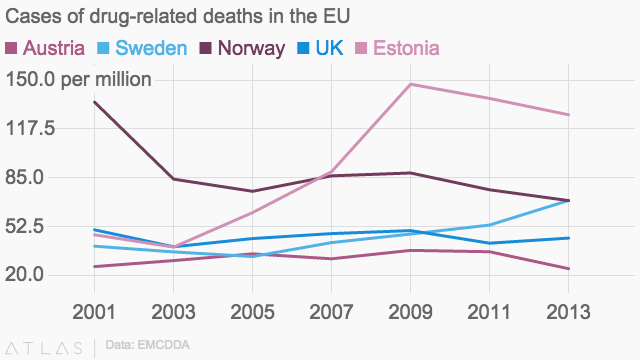 Norway hopes the nationwide roll-out of the program will “prevent criminality” and enshrine “equal treatment within the legal system.” The court will decide the conditions that would come with the rehabilitation program. Failure to meet these conditions could result in a prison sentence.

The legislation, which was introduced by the Conservative party, has widespread support from the majority of political parties in the Norwegian parliament. That said, some campaigners have slammed the program.

“Norway’s expanded drug court program is, if anything, worse. It is effectively a form of forced treatment,” John Melhus, a spokesperson for The Norwagian Association for Humane Drug Policies, told Quartz.

Melhus rejects the government’s conclusion that the pilot program has been successful. He points to 2014 report by the Norwegian Institute for Alcohol and Drug Research, which found that only just over a third of convicted drug addicts actually completed the program. The report notes that it was the most addicted that tend to drop out.

Melhus says the program is based on “intrusive supervised urine controls” and will actually “punish the most disadvantaged drug addicts more severely.”

The Ministry of Justice refused to specifically comment on these allegations, but said: “The treatment is voluntary and requires the consent of the convicted person.”