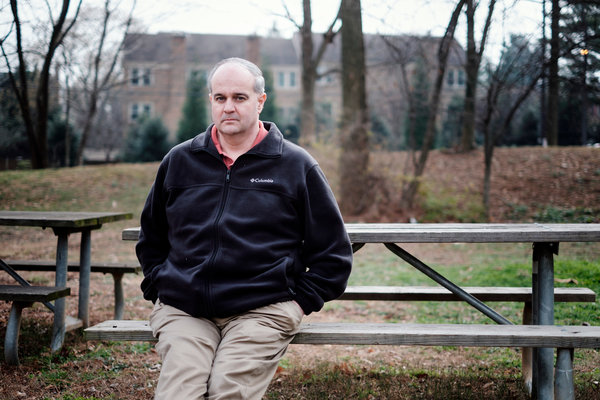 Daryl Johnson once worked in the branch of the Department of Homeland Security that studied the threats posed by antigovernment groups. His former office was shut down more than five years ago.

But when members of an armed group took over a federal wildlife refuge in Oregon last week, Mr. Johnson was not surprised.

In 2009, the former analyst wrote a report that warned of a growing antigovernment movement and the possible recruitment of returning military veterans that could “lead to the potential emergence of terrorist groups or lone-wolf extremists.”

His words drew fierce criticism from Republican lawmakers and conservative news media, labeling the report an unfair assessment of legitimate criticisms of the government. The document was retracted after Janet Napolitano, who was then the Homeland Security secretary, apologized to veterans, and the Extremism and Radicalization Branch was quietly dismantled.

Now, as the takeover of the remote federal wildlife preserve enters its second week, a renewed focus is being placed on the so-called militia movement and on the efforts of the federal government, particularly the Department of Homeland Security, to identify and combat potential threats.

Some lawmakers and former intelligence analysts, such as Mr. Johnson, say the department has allocated significant resources to combating violent extremism among Muslims, but has failed to gather the intelligence needed to fight right-wing extremism in the United States.

On Friday, the department announced a task force with the Justice Department to focus on countering homegrown extremists radicalized by foreign groups such as the Islamic State, drawing staff members from dozens of federal and local agencies. It is unclear if the group would investigate domestic antigovernment groups.

“The D.H.S. is scoffing at the mission of doing domestic counterterrorism,” Mr. Johnson said. “The same patterns that led to the growth of the antigovernment groups in the 1990s is being played out today. D.H.S. should be doing more.”

Although the F.B.I. has primary responsibility for countering terrorism, the Department of Homeland Security conducts analysis and intelligence gathering, and tries to spot troubling trends.

Representative Keith Ellison, Democrat of Minnesota, who last year signed a letter with 15 lawmakers asking President Obama to reopen the extremism office at Homeland Security and update the 2009 report, agreed with Mr. Johnson.

Mr. Ellison said the killing of nine people at a black church in Charleston, S.C., which was apparently racially motivated, along with the current standoff in Oregon, show why the government needs to scrutinize the growth of antigovernment groups.

“The Department of Homeland Security needs to deal with Muslim extremists, but don’t ignore every other kind of threat,” Mr. Ellison said.

Citing data from a 2013 report produced by the United States Military Academy’s Combating Terrorism Center, Mr. Ellison said, “Right-wing extremists have launched an average of 330 attacks a year and killed about 250 people between 2002 and 2011. These are dangerous people.”

Department officials deny any neglect of domestic terrorism, pointing to a report with the F.B.I. that documented violent attacks by antigovernment groups since 2010. The antigovernment militia movement grew to 276 groups in 2015, according to the Southern Poverty Law Center, an Alabama-based organization that tracks extremist organizations. That number is up from 202 in 2014, a 37 percent increase.

The center said the militia movement grew explosively after Mr. Obama was elected in 2008, from 42 groups to 334 in 2011, before declining in recent years. The number of militia groups peaked at 370 in 1996 with President Bill Clinton in office.

Antigovernment groups have occasionally clashed with state and federal officials over the use of public lands, religious rights or the regulation of firearms. Violent clashes with the government, such as in Ruby Ridge, Idaho, in 1992, and near Waco, Tex., in 1993, have at times ended in bloodshed and became rallying cries for antigovernment militants. A survey of law enforcement agencies last year, conducted by the Police Executive Forum, found that 74 percent of the 382 agencies polled cited antigovernment extremism as one of the top three terrorist threats.

Heidi Beirich, who oversees the poverty center’s tracking of extremist groups, said the militia group’s actions in Oregon were predictable, considering the government’s response to a confrontation with Cliven Bundy, a Nevada rancher, last year. At the time, the Bundy family refused to pay the Bureau of Land Management more than $1 million in cattle-grazing fees. The government relented when an armed militia gathered on the family’s ranch and a standoff ensued. Mr. Bundy’s son, Ammon Bundy, is among the leaders of the continuing occupation of federal land in eastern Oregon.

“We believe that they were emboldened by their ability to run federal officials off at the point of a gun,” Ms. Beirich said. “Now, a year and half later, there have been no prosecutions whatsoever. Pointing a gun at a federal officer is a crime.”

Many Republicans who had expressed support for Mr. Bundy have condemned the takeover of the federal building.

The radicalization office was meant to monitor domestic threats, with a major focus on militia groups, particularly because Homeland Security analysts worried that these groups might be able to recruit returning military veterans. The reference to veterans, in addition to claims that the report was targeting Tea Party activists, promoted the backlash that led to the closing of the office.

Former Speaker John A. Boehner, Republican of Ohio, who was then House minority leader, criticized Ms. Napolitano for the department’s failure to use the term “terrorist” to describe groups such as Al Qaeda, while “using the same term to describe American citizens who disagree with the direction Washington Democrats are taking our nation.”

After the criticism, the Homeland Security Department reduced the number of analysts who studied domestic terrorism that was unconnected to foreign threats. Last September, Jeh Johnson, the Homeland Security secretary, created the Office for Community Partnerships in order to counter violent extremism. The office works with local communities and focuses on both domestic and foreign threats, the department said.

But Daryl Johnson, who is now a security consultant in the Washington, D.C., area, said the focus of the community partnership office is different from his former branch at Homeland Security. “It has nothing to do with putting together intelligence, analysis or law enforcement,” he said.

The Department of Justice has increased its efforts to combat domestic terrorism in recent years, funding a number of research projects at various universities to examine trends in the growth of right-wing, antigovernment groups. The F.B.I. also continues to investigate domestic terrorist groups, and its counterterrorism division publishes an annual assessment of homegrown domestic threats.

In 2014, Eric H. Holder Jr., then the attorney general, re-established the Domestic Terrorism Task Force, a group that was created after the 1995 Oklahoma City bombing to share information about domestic threats. The task force had been dormant for years as the focus turned to foreign terrorist plots.

Daryl Johnson said that despite these efforts, he thinks the extremism office is still needed. “The Department of Justice looks at these things to make its law enforcement cases,” he said. “The mandate for the D.H.S. is broader. It’s supposed to provide the analysis and intelligence to track these kinds of things before it gets to the point of confrontation.”

An earlier version of this article referred incorrectly to the location of a federal wildlife refuge that has been taken over by an armed militia. It is in eastern Oregon, not northeastern. The article also misstated the year in which Eric H. Holder Jr. re-established the Domestic Terrorism Task Force. It was in 2014, not 2015.