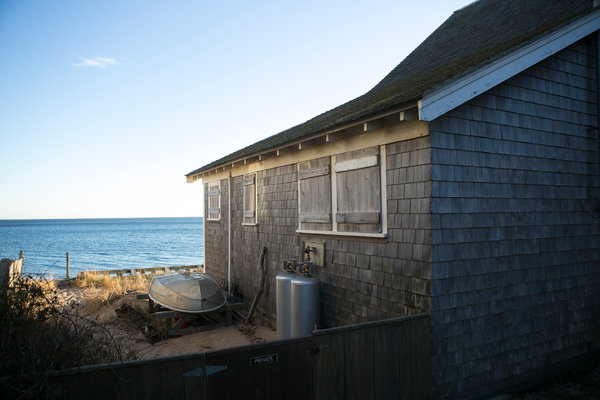 PROVINCETOWN, Mass. — This resort town at the tip of Cape Cod is such a popular destination, its promoters like to say, that even the Pilgrims landed here before they settled in Plymouth.

In the summer, Provincetown is still one of the most crowded vacation spots in New England. A historic art colony and a gay destination, it draws up to 65,000 people to the galleries on frenzied Commercial Street and the windswept dunes of the Cape Cod National Seashore. But come late fall, the beaches and bars mostly empty out. And it is not just tourists who decamp. Most second-home owners pack up, too. And, increasingly, so do people who once made Provincetown their home year-round. These days, just 2,800 hardy souls endure here through the winter.

“It’s like a Potemkin village,” Stephen Borkowski, 61, a freelance art historian and year-round resident, said the other day as he strolled down the middle of a deserted Commercial Street, where many shops were closed for the season. “There are the store facades and about five people.”

Provincetown, like many summer havens, is caught in a vicious cycle of economic and demographic change, with a widening divide between the haves and the have-nots that is threatening its future. The long-running invasion by second-home owners and investors, who now own 71 percent of the homes here, has jacked up the price of real estate. One 418-square-foot home, albeit with 30 feet of mesmerizing waterfront, is going for nearly $1.6 million.

As a result — with housing and year-round jobs increasingly scarce — Provincetown is hollowing out. The winter population dropped 14 percent between 2000 and 2010. Families have left or have avoided settling here in the first place. The high school closed a few years ago. And the dwindling population is graying. The median age of 54.3 is far above the national median of 37.4. And Provincetown is not even the oldest town on the Cape; that distinction belongs to nearby Wellfleet, where the median age is 62.2.

“Cape Cod is running a social experiment about whether you can have a society without children,” said Michael Goodman, the executive director of the Public Policy Center at the University of Massachusetts at Dartmouth.

“While the jury is still out, I’m skeptical,” he said. “The sustainability of these communities is a major challenge.”

On Tuesday night, the town selectmen here took a controversial step toward what they hope will halt the decline. They voted unanimously for a tax exemption that would lower the property taxes on year-round residents, some of whom are on fixed incomes, while raising these taxes on second-home owners who live here part-time. As provided for in state law, the exemption would shift the tax burden “away from certain lower valued, residential properties to higher valued homes, most apartment buildings and to second homeowners.”

The exemption is intended to make housing somewhat more affordable and to encourage year-round residency. The town’s board of assessors said that for a year-round resident here who owns a condominium with a value of $369,900, the annual property tax bill of $2,700 will go down by $685; for a part-time resident in a similar condo, the board said, the bill will go up by $144. Town officials estimate that 1,300 residential properties will have their taxes lowered, while 2,700 will pay more.

Such exemptions are becoming increasingly popular across the country, particularly in hot real estate markets, where gentrification is pricing longtime residents out of their homes. The State of Florida has had a homestead exemption for years. Thirteen other cities and towns in Massachusetts, including Boston, Cambridge and Nantucket, have enacted similar measures.

But David Panagore, the town manager here, said Provincetown was “the canary in the coal mine” because its problems were more extreme and, at just three square miles and surrounded by the national seashore, it had nowhere to expand.

A few second-home owners here supported the exemption. Tony Kushner, the Pulitzer Prize-winning playwright, who owns a weathered 1830 house here, said by telephone from New York that paying the new rate would not impose a hardship on him. He said he felt a responsibility to help those who keep the town functioning in winter.

“Provincetown is really struggling to maintain a kind of social coherence because it’s tremendously expensive to live there,” he said. “And if people can’t live there, that will be very much to the town’s detriment.”

But the exemption has inflamed passions and stirred resentment among many other second-home owners and investors, who pay 80 percent of the taxes. They say they already give much to the town and use its services for only a portion of the year. They also think the exemption will benefit some people who do not need it.

“For many of the seasonal residents, Provincetown is their emotional home,” said Steve Fossella, 58, an information technology project manager who lives in Quincy, in suburban Boston, and owns a second home in Provincetown, where he is the president of the town’s Part-Time Resident Taxpayers Association, which has 300 members.

A particular grievance of seasonal homeowners is that they pay taxes but have no say in how their money is spent because they cannot vote in Provincetown — better known as taxation without representation.

In approving the tax exemption, the selectmen here bemoaned the divisiveness of the debate but said the housing crisis was so acute and the year-round population such an endangered species that it was worth a try.

Tom Donegan, the chairman of the board of selectmen, conceded that it was not perfect. “It doesn’t account for the vast appreciation in home values,” he said. “It may give a benefit to some who may not need it. But it’s the best thing we’ve got.” He said that generally, those who needed it the most would benefit most.

Still, it is not clear how much difference it will make in the long run. Full-time residents like Rik Ahlberg, 45, a writer and a renter, said he doubted it would address the winter absurdity of having 70 percent of the homes sit vacant — or, as he put it, “all this empty housing and nowhere to live.”

Mr. Goodman, of the University of Massachusetts at Dartmouth, said the exemption could provide some modest relief, but he also questioned whether it would solve fundamental problems like the housing pinch, the lack of well-paying jobs and the population drain.

As they mull these long-term challenges, town officials are faced with more immediate ones, like expanding water-delivery and sewage systems for 3,000 people in the winter to accommodate peak crowds of 65,000 in the summer.

Mr. Panagore, the town manager, said the tax exemption was forcing everyone to wrestle with existential questions.

“Not just who should bear the burden for the peak event,” he said. “But if we do nothing, is this a town where we turn out the lights in October and turn them back on in May? How long can we last when folks can’t afford to live here?”