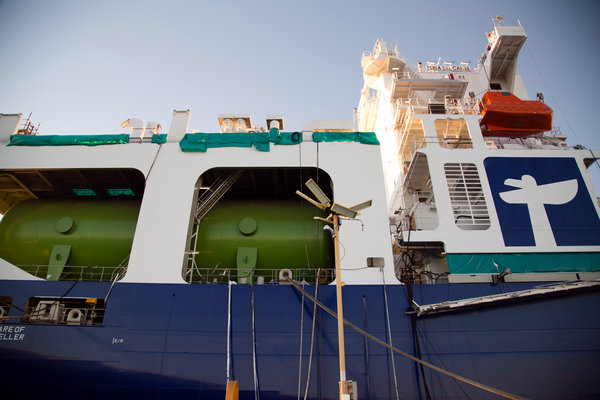 SAN DIEGO — With its cavernous cargo holds and gleaming white superstructure, the 730-foot Perla del Caribe, which is nearing completion at a shipyard here, looks like any midsize container ship.

But at the stern, visible through cutouts in the superstructure, are two huge steel tanks that show this is no typical vessel. The bulbous tanks, 90 feet long and painted an eye-catching lime green, together will carry half a million gallons of liquefied natural gas, or L.N.G., chilled to minus 260 degrees Fahrenheit. The gas will be the primary fuel used to power the ship when it begins moving cargo on a weekly schedule from Jacksonville, Fla., to San Juan, P.R., early next year.

While L.N.G. has been used for some ferries and other vessels, the ship and a second, identical one that began plying the Jacksonville-San Juan route last month, are the first container ships to use the fuel. Cleaner-burning L.N.G., which consists almost entirely of methane, can reduce carbon dioxide emissions by roughly 15 percent to 20 percent compared with the heavy tarlike fuels used on most ships.

“We came to a decision that rather than putting Band-Aids on things, we should look for ways to address core issues of maritime emissions,” said Peter Keller, the executive vice president of Tote, the shipping company that built the two vessels at a cost of about $350 million.

The two ships will make only a tiny dent in the amount of CO2 released by ships worldwide, about a billion tons a year. And as nations gather in Paris for final negotiations on a new climate treaty, the issue of greenhouse gas emissions from shipping remains a point of dispute.

Environmentalists and others say that too little has been done to rein in ship emissions. As a percentage of worldwide carbon dioxide emissions, the contribution from shipping is relatively small — about 2.6 percent of the global total in 2012, the most recent year for which firm data available. But that figure is poised to grow enormously.

A report released last month by the European Parliament concluded that as the global economy expands, and as countries and other industries reduce their carbon footprint, by 2050, shipping could account for about one-sixth of all the CO2 released into the atmosphere by human activity.

“It will consume a large part of the carbon budget,” said Sotiris Raptis, an analyst with Transport and Environment, a federation of European environmental groups. “That will put us at serious risk of missing emissions targets” that would help limit global warming, he said.

Because most of its work occurs at sea, shipping is something of a hidden industry. And out of sight can be out of mind for emissions.

“It doesn’t feel that the industry is under any scrutiny,” said Tristan Smith, a lecturer and researcher at University College London who helped prepare a 2014 report on ship emissions. “It’s so invisible to the general public.”

As evidence of this lack of scrutiny, environmentalists say, language about emissions from shipping, and from commercial aviation, was eliminated from a draft of the Paris climate treaty during earlier negotiations. Although the language was eventually reinstated, there is no certainty it will make the final cut.

And while the previous climate treaty, the 1997 Kyoto Protocol, did mention shipping, “unfortunately, nothing meaningful happened,” Mr. Raptis said.

The shipping industry and the International Maritime Organization, the United Nations agency that is responsible for regulating it, disagree.

Pound for pound and mile for mile, shipping is already the most environmentally efficient way to move cargo, and standards to improve efficiency in new ships went into effect earlier this year. Those standards are subject to regular review and could be tightened “if the technology supports that,” a spokeswoman for the United Nations agency said.

Improving a ship’s efficiency means it burns less fuel. And for most ships, fuel represents at least half the operating cost. “So there is an enormous economic incentive for shipping companies to try to minimize their operating costs,” said Christopher L. Koch, who recently retired as the president of the World Shipping Council, which represents so-called liner shipping companies that own and operate container ships and other vessels. “And the more you save on fuel, the less CO2 you’re producing.”

Many liner shippers have adopted efficiency improvements, which can include relatively straightforward steps like polishing the propeller or coating the hull with paint that inhibits the growth of algae and other organisms, to more extensive and expensive work to improve engine performance, reshape the bow or add fins or ducts to the propeller.

Some improvements are even more elaborate. Silverstream Technologies, a London-based company, is one of several that have developed systems that produce a carpet of tiny air bubbles along the bottom of a ship. “The hull touches mostly air, so there’s much less friction,” said Noah Silberschmidt, the company’s chief executive.

Interactive Feature | Short Answers to Hard Questions About Climate Change The issue can be overwhelming. The science is complicated. We get it. This is your cheat sheet.

Silverstream’s technology, which includes pumps and other equipment and modifications to the hull, has been tested by Shell; in sea trials on a 575-foot-long tanker, it improved efficiency by about 5 percent. A Norwegian Cruise Line ship under construction in Germany will have the technology when it is launched in 2017.

But the simplest way to improve a ship’s efficiency is by slowing down. Studies have shown that such “slow steaming” — reducing speed by at least several nautical miles per hour — can significantly reduce fuel consumption, and thus CO2 emissions. In some cases, emissions have been reduced by more than half.

Slow steaming was widely adopted by liner shippers during the global economic slowdown that began in 2008, and industry groups point to it as being largely responsible for reducing the amount of CO2 emitted per unit of cargo.

But critics point out that there is no guarantee slow steaming will continue. In a stronger worldwide economy, there will be greater pressure on shippers to get more goods to market sooner. Even if slow steaming continues and per-unit emissions remain low, as more cargo is shipped, total emissions will increase.

Liner shippers move only about 60 percent of ocean-going cargo. With other types of shipping — including bulk carriers of oil, grains and other commodities — the shipowner passes the fuel cost on to the company that is chartering the vessel, so there is little incentive for the owner to make improvements.

The United Nations agency’s efficiency standards apply only to new ships, not the approximately 70,000 existing commercial vessels. And because of the unique structure of the shipping industry — vessels are usually registered in countries like Panama and Liberia, partly to avoid stricter regulations elsewhere — it can be difficult to get information about environmental performance for the industry as a whole and for individual ships.

The Carbon War Room, established by Richard Branson and others to promote market-based efforts to reduce emissions, is trying to plug that hole, evaluating and rating ships for their efficiency, or lack of it, so companies that want to be more environmentally responsible can charter cleaner vessels.

“There’s a lack of information and transparency in being able to tell a more efficient ship from one that is less efficient,” said Victoria Stulgis, a senior associate with the Branson project, ShippingEfficiency.org. By enabling charterers to hire cleaner ships, the project aims to accelerate retrofitting of older ones, some of which could still be plying the oceans a quarter-century from now.

A Call for Targets

But environmentalists say that efficiency standards, even if more broadly applied, can go only so far. The only way to truly rein in shipping emissions, they argue, is by adopting specific reduction targets, as many countries and other industries have.

Even if the International Maritime Organization tightens its efficiency standards, “this won’t be enough to reduce emissions,” said Mr. Raptis of Transport and Environment. “We need reduction targets.”

But the shipping industry is concerned that targets could eventually disrupt world trade by restricting ships, and the United Nations agency has for now rejected that approach — most recently in May, when it put off discussion of a proposal that would only have set up a process to work toward reduction targets.

The proposal came from the Marshall Islands, which as the third-largest register of ships after Panama and Liberia, benefits greatly from the shipping industry but also stands to suffer from rising sea levels in the Pacific caused by climate change.

Depending on the scope of any reduction targets, experts say, the entire industry might eventually have to cut emissions sharply. Mr. Smith of University College London said ships could realistically be expected to cut fuel use and emissions by about 50 percent through various efficiency improvements, including slow steaming. “But to continue to improve beyond that is a real challenge,” he said.

What may be needed are development of alternative fuels like hydrogen, and use of wind or other renewable energy. One of the more promising technologies involves a device called a Flettner rotor, which was invented nearly a century ago. So far, only a few ships have these rotors, which are tall columns that rotate in a windstream and produce a propulsive force in the same way that a spinning baseball follows a curved path.

For now, efforts like Tote’s are among the first steps toward propelling ships with fuels that produce less carbon dioxide.

Much of the impetus for building the two ships, however, grew out of concerns about other pollutants, including sulfur dioxide, which causes acid rain, as well as nitrogen oxides and particulate matter, or soot, which can cause health problems. Burning liquefied natural gas has a far greater effect on reducing those emissions than it does on reducing carbon dioxide.

Those pollutants are now regulated for shipping within coastal zones of North America and Europe, and may eventually be more tightly controlled. Shipping companies may shift to lower-sulfur fuel oils or install scrubbers to remove the pollutants from exhaust. Some, like Tote, may opt for L.N.G.

From a carbon emissions standpoint, liquefied natural gas is not an ideal solution. It is still a fossil fuel, although a cleaner one. And in large marine engines like the barn-size one that sits below decks in the Perla del Caribe, L.N.G. cannot ignite on its own. So with each stroke the engine must burn a small amount of diesel oil, referred to as a pilot fuel, reducing the environmental benefits.

There are also concerns about methane “slip,” or emissions of unburned fuel from the engine. Methane is a far more potent greenhouse gas than CO2, and some studies have suggested that methane slip may at least partially undermine any gains from using L.N.G.

There are also extra costs. The tanks, with a thick layer of insulation between double walls of thick steel, are far more expensive than fuel oil tanks, and the equipment to handle and vaporize the supercold liquid is elaborate and costly as well. And infrastructure must be developed to ensure a steady supply of the fuel, something that Tote is in the process of doing at Jacksonville.

“The whole cryogenic liquid thing adds another aspect to it,” said Mike Green, one of the chief engineers of the Perla del Caribe.

Still, despite the costs and limited carbon-emissions benefits, Mr. Keller of Tote said the company was expanding its use of L.N.G, converting ships that it uses for its other large cargo business, between Washington state and Alaska.

“Whether it’s the Caribbean or Alaska, everyone is concerned about the environmental aspects,” he said.