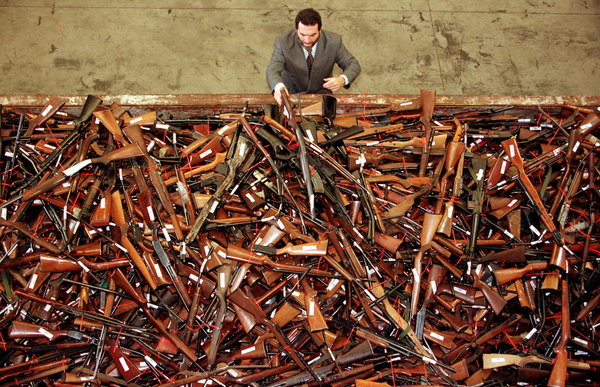 In the continuing debate over how to stop mass killings in the United States, Australia has become a familiar touchstone.

President Obama has cited the country’s gun laws as a model for the United States, calling Australia a nation “like ours.” On the campaign trail, Hillary Clinton has said the Australian approach is “worth considering.” The National Rifle Association, meanwhile, has dismissed the policies, contending that they “robbed Australians of their right to self-defense and empowered criminals” without reducing violent crime.

The oft-cited statistic in Australia is a simple one: There have been no mass killings — defined by experts there as a gunman killing five or more people besides himself — since the nation significantly tightened its gun control laws almost 20 years ago.

Mass shootings in Australia were rare anyway. But after a gunman massacred 35 people in the Tasmanian town of Port Arthur in 1996, a public outcry spurred a national consensus to severely restrict firearms. The tightened laws, which were standardized across Australia, are more stringent than those of any state in the United States, including California.

Pushed through by John Howard, the conservative prime minister at the time, the National Firearms Agreement prohibited automatic and semiautomatic assault rifles and pump shotguns, in all but unusual cases. It tightened licensing rules, established a 28-day waiting period for gun purchases, created a national gun registry, and instituted a temporary buyback program that removed more than 20 percent of firearms from public circulation.

Several of the measures, including waiting periods and background checks, have been adopted piecemeal by different states in America. But the United States has never tried a national gun buyback program; in Australia, that required raising taxes. And the United States has never been able to do what Mr. Howard did: forge a broad agreement on a sweeping set of gun control measures that applies to the entire nation.

A test of those laws came in December 2014, when a gunman who had expressed sympathy for Islamic extremism took hostages in a cafe in Sydney. The assailant, Man Haron Monis, brandished a sawed-off, pump action shotgun that he had obtained illegally.

An inquest said the gun may have been in circulation before pump action shotguns were essentially banned in 1996 and was never confiscated in the buyback. According to the inquest, his shells were 15 to 20 years old.

During the 17-hour siege of the cafe, Mr. Monis fired several times, once into a wall, before killing the cafe manager. At that point, the police stormed in, killing the gunman and another hostage in the crossfire.

It is impossible to say whether gun restrictions saved lives in the siege, but some politicians say they believe so.

“It is the ready availability of weapons, particularly those that are automatic or semiautomatic, that increases the likelihood that people in a moment of madness, or malice, or hatred, will kill a lot of people,” Mr. Howard said in October, after a man opened fire on a community college campus in Oregon, killing nine.

Measuring the broad effectiveness of Australia’s gun control laws is complicated. Australians themselves continue to debate their impact, and some have sought to loosen restrictions on gun ownership.

Critics have argued that gun violence was falling in Australia before 1996 and would have continued to fall even without the gun control measures. Others have suggested that even as gun-related deaths fell, people in Australia may have resorted to using other weapons to kill.

To assess these claims, scholars have examined not just mass shootings, but also all intentional deaths caused by firearms, adjusting for population growth.

Total intentional gun deaths fell by half in the decade after the 1996 restrictions were put in place, even as Australia’s population grew nearly 14 percent. The rate of gun suicides per 100,000 people dropped 65 percent from 1995 to 2006, and the rate of gun homicides fell 59 percent, according to a 2010 study by Andrew Leigh of Australian National University and Christine Neill of Wilfrid Laurier University.

When the data in that study is updated to include the latest figures from the Australian Bureau of Statistics, as well as the numbers going back to 1968, several facts emerge.

First, the rates of intentional firearm deaths were substantially higher in the 28 years before the gun control measures were adopted in 1996 than in the 17 years after. How much of that decline can be attributed to the new policies can be debated, but the difference is clear.

The data confirms that gun deaths were already falling before the National Firearms Agreement. The rate of intentional gun deaths fell about 33 percent from 1986 to 1996. The decline accelerated, however, under the new gun control measures, with the rate dropping about 60 percent from 1996 to 2006.

The impact of the gun laws is difficult to assess partly because of the low rates of intentional firearms deaths in Australia. Gun-related homicide rates are even lower, because suicides make up about 80 percent of all gun deaths.

Mr. Leigh and Ms. Neill tried to measure the effect of the 1996 measures across Australian states and territories to see whether different levels of gun confiscation led to different results. They found that the places where the most guns were removed from public circulation also experienced the largest drops in intentional gun deaths.

The impact of the buyback appeared more pronounced on suicides.

The data also indicates that overall homicide and suicide rates fell in the decade after 1996, meaning Australians did not respond to the gun control measures by killing one another or themselves using other weapons at higher rates.

Over all, Mr. Leigh and Ms. Neill estimate that at least 200 lives are saved annually because of Australia’s gun buyback program.

The introduction to the Australian market this year of a shotgun that allows rapid fire using a lever action rekindled debate over the restrictions, with some enthusiasts arguing that they felt cheated out of owning a gun. The government banned a version of the shotgun that holds seven rounds but approved a five-round version. There are also efforts to lower the legal age of supervised shooters in Tasmania, to 15 from 16.

Senator David Leyonhjelm, who supports easing gun controls, said Australia resembled Britain, Canada and New Zealand, where mass shootings are infrequent. “America is an outlier,” he said. “We are not like America.”

In the 18 years before the Port Arthur massacre, there were 12 mass shootings in Australia, according to a 2006 study in the journal Injury Prevention. The deadliest shooting since 1996 occurred last year, when a farmer in New South Wales fatally shot his wife and three children before killing himself.

Tasmania’s former premier, Tony Rundle, said reaching the 1996 agreement was difficult and warned against revising it. “I told people all over the country, in town hall meetings, we don’t want to go down the path that America has traveled,” said Mr. Rundle, who is now retired. “Eroding those laws now, chipping away at the edges, would be a folly.”

Mr. Howard, the prime minister who pushed through the measures, agreed. “There should be no relaxation, complacency or compromise,” he said in an interview. “That is the view of people all around Australia.”