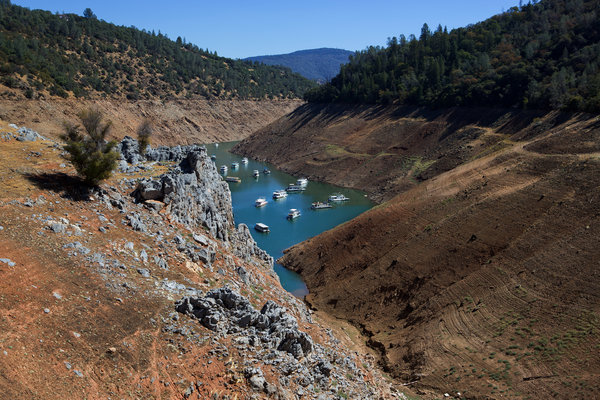 A solid majority of Americans say the United States should join an international treaty to limit the impact of global warming, but on this and other climate-related questions, opinion divides sharply along partisan lines, according to the latest New York Times/CBS News poll.

Public support for international and domestic measures to address climate change may provide a lift for American negotiators attending the major United Nations climate change conference that began in Paris on Monday. But the stark partisan divide on climate policy will still make it difficult for President Obama and his successors to put in place the energy and climate policies that will be needed to support a robust international agreement, the goal of the Paris talks.

Republicans in Congress and many Republican governors oppose Mr. Obama’s proposal to limit emissions from power plants, for example, complicating his ability to meet targets he has set to comply with United Nations climate goals. And the Obama administration has made it clear that any agreement it would sign in Paris would not take the form of an internationally enforced treaty that would require Senate ratification.

Document | Full Results of New York Times/CBS News Poll on the Environment Two-thirds of Americans think the United States should join a binding international agreement to curb growth of greenhouse gas emissions, but a slim majority of Republicans remains opposed, the poll found.

Still, the shift in public opinion has many advocates of strong climate change measures hopeful that the Paris talks could provide a turning point.

“If you just look over the past five or six years since Copenhagen, there’s been a shift,” said David Waskow, director of the International Climate Initiative at the World Resources Institute, referring to the largely inconclusive global summit meeting that took place in Denmark in 2009. “There’s much more awareness of issues like sea level rise, water scarcity and climate instability.”

Seventy-five percent of Americans polled said was that global warming already having a serious environmental impact or would in the future. Nine in 10 Democrats agreed, compared with 58 percent of Republicans. One-third of Republicans said they believed it would never have much of an impact on the environment.

Thinking about policies to reduce carbon emissions, Americans generally favor regulating business activity more than taxing consumers. The poll found broad support for capping power plant emissions. Half of all Americans said they thought the government should take steps to restrict drilling, logging and mining on public lands, compared with 45 percent who opposed such restrictions. Support for limiting mineral extraction on public lands rose to 58 percent among Democrats.

Interactive Feature | Short Answers to Hard Questions About Climate Change The issue can be overwhelming. The science is complicated. We get it. This is your cheat sheet.

But just one in five Americans favored increasing taxes on electricity as a way to fight global warming; six in 10 were strongly opposed, including 49 percent of Democrats. And support was not much higher for increasing gasoline taxes, at 36 percent over all.

On Monday, the United Nations began its climate change conference, bringing together representatives from 195 countries and the European Union in an effort to reach a binding agreement to address the warming of the planet. This is the 21st gathering of nations who belong to the United Nations Framework Convention on Climate Change, but the first since Copenhagen to elicit high hopes for a global commitment.

At the third such meeting, in 1997, the parties agreed to the Kyoto Protocol, acknowledging the existence of man-made global warming and setting goals for worldwide emissions reductions. But that year the United States Senate voted 95-0 to adopt a measure rejecting any international agreement that “would result in serious harm to the economy of the United States.” The United States never joined the Kyoto treaty.

In advance of this week’s summit meeting, Mr. Obama made the case that addressing climate change is an economic imperative.

“We have to do something about climate change,” he said at a meeting with business leaders last month. “Because not only is it going to have an impact on our children and our grandchildren, and we have a moral obligation to leave them a planet that is as wonderful as the one that we inherited from our forebears, but it’s really important for America’s bottom line and economic growth.”

While it is true that young Americans tend to be slightly more concerned about global warming than their elders, their views are not as environmentally proactive as those of some other demographic groups. Fifty-one percent of respondents to the new poll said they worried about global warming a great deal or a fair amount. Among adults under 30, the number was 54 percent; for Democrats, it climbed to 60 percent.

And while 68 percent of respondents under 30 supported taxing companies’ carbon emissions, that was just five points higher than the overall number — and lower than the nearly three-quarters of Democrats who professed support.

During the darkest days of the recent recession, concern about climate change became subsumed by economic anxieties. But concern about the environment is now back to pre-recession levels. Most respondents to the recent poll said that in situations where a sacrifice must be made, protecting the environment was more important than stimulating the economy — by a margin of 54 percent to 34 percent.

This is nearly identical to the national numbers in spring 2007, just before the Great Recession, when 52 percent took the side of protecting the environment and 34 percent said the economy was more important. In 2009, at the depths of the recession, people favored stimulating the economy by a margin of more than two to one.

The nationwide telephone poll was conducted Nov. 18 to 22 among 1,030 adults. The margin of sampling error is plus or minus four percentage points.