Closing a Hospital, and Fearing for the Future – NYTimes.com
http://mobile.nytimes.com/2015/10/09/us/closing-a-hospital-and-fearing-for-the-future.html 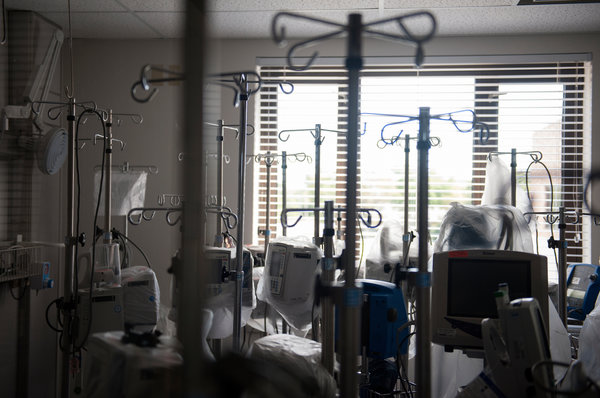 INDEPENDENCE, Kan. — The rooms in the intensive care unit are filled with folded-up walkers and moving boxes. In the lobby, plaques and portraits have been taken off the wall. By this weekend, the last patients will be discharged and Mercy Hospital Independence will close, joining dozens of rural hospitals around the country that have not been able to withstand the financial and demographic challenges buffeting them.

The hospital and its outpatient clinics, owned by the Mercy health care system in St. Louis, was where people in this city of 9,000 turned for everything from sore throats to emergency treatment after a car crash. Now, many say they are worried about what losing Mercy will mean not just for their own health, but for their community’s future.

Mercy will be the 58th rural hospital to close in the United States since 2010, according to one research program, and many more could soon join the list because of declining reimbursements, growing regulatory burdens and shrinking rural populations that result in an older, sicker pool of patients. The closings have accelerated over the last few years and have hit more midsize hospitals like Mercy, which was licensed for 75 beds, than smaller “critical access” hospitals, which are reimbursed at a higher rate by Medicare.

Whether in Yadkinville, N.C.; Douglas, Ariz.; or Fulton, Ky., all of whose hospitals were also shuttered this year, these institutions are often mainstays of small communities, providing not just close-to-home care but also jobs and economic stability.

“People are sad. People are shocked,” said Sister Annrené Brau, who came here in 1989 as a hospital administrator and is the town’s last remaining member of the Roman Catholic order that took over the hospital in the 1920s. “No one thought we would ever come to this.”

On Thursday, just a day before the main hospital building was to close, a Mercy spokeswoman said another health system had tentatively agreed to open an urgent care clinic in Independence and take over most of Mercy’s outpatient operations, but not inpatient services or the emergency room. An earlier plan for another hospital to take over some of Mercy’s operations here fell through last month.

Mercy’s problems attracted notice in Topeka, the state capital, as some lawmakers renewed calls on the state to expand Medicaid under the Affordable Care Act, a move that would have pumped an estimated $1.6 million a year into the hospital’s coffers. But Gov. Sam Brownback, a Republican, remained steadfastly opposed to the idea. Hospital officials said the Medicaid funds would have helped significantly but probably would not have ensured Mercy’s long-term survival.

Reductions in Medicare payment rates are hitting many rural hospitals hard, because they serve older populations and operate on thinner financial margins than their urban and suburban counterparts.

“If it were just one silver bullet, it would have been easier to attack it legislatively and figure it out,” said Maggie Elehwany, the chief lobbyist for the National Rural Health Association. “But it’s really death by a thousand different knives.”

For Independence, Mercy was a constant in a century that brought drastic changes, many of them unwelcome, to this part of rural America. The oil boom came and went, the population dropped, and some companies took their jobs to bigger cities. This year, a large Amazon distribution center closed in Montgomery County, which includes Independence. But even then, many in town said they never thought the hospital, opened by local physicians in 1910 and taken over by the Sisters of Mercy in 1927, would follow suit.

Linda Swenson, 68, said she was often at Mercy, for tests, doctor’s appointments or emergency room visits. She knows many of the employees there, and is especially fond of the nursing staff. “It’s crushing to think that it’s closing,” she said last week before getting lunch downtown at the Vintage Steak House.

Mercy’s emergency room had 8,000 visits a year, hospital officials said, of which roughly 250 were actual medical emergencies. Joanne Smith, a Mercy spokeswoman, said the preliminary agreement called for the opening of an advanced urgent care center that might eventually offer full emergency care.

But even if that happens, the economic cost of losing the hospital could be stark, local officials said. Though there are two other hospitals within a half-hour’s drive, Micky Webb, the city manager, said companies considering coming to Independence often asked whether there was a hospital in town, and that residents felt more secure with one within a few minutes’ reach. The fire department recently bought a new ambulance because the closing will lead to longer transport times, and there are plans to buy another soon.

Rod Zinn, a land surveyor who lives in town, said he had hoped that his aging parents would move to Independence from another part of the state, but that they were dissuaded by uncertainty about the hospital’s future.

“It’s a great community,” he said, “and for a community this size, it should have a hospital.”

This slice of southeast Kansas, about 90 minutes by car from Tulsa, Okla., and about two hours from Wichita, Kan., has long struggled to attract businesses and educated young people. But Independence is still an economic center for the stretches of farmland surrounding it. The downtown area has ample foot traffic and few empty storefronts. Along the highway leading into town, fast-food restaurants and car dealerships stand near a faded blue “H” sign pointing toward Mercy.

Mardie Long, a nurse practitioner at Mercy, said many of her patients, especially the older ones, had expressed anxiety since learning last month that the hospital would close. Ms. Long has pledged to her patients she will continue her practice in town.

“I see my patients at Walmart. I see them at the grocery store,” said Ms. Long, who was born at Mercy 51 years ago. “And many times, the first question is, ‘What will you do?’ ”

But Ms. Long was an increasingly rare figure at Mercy. Many doctors left after only a few years in town, and Kim Day, the hospital’s interim president, said the high turnover helped explain why about half of Independence residents had gone elsewhere for their care in recent years.

“They get frustrated with not having consistent care,” he said, “so they start reaching out to larger communities where there is more continuity.”

While hospital closings clearly have an economic and emotional impact, it is less clear whether they jeopardize people’s health. A study published in May in the journal Health Affairs found that hospital closings had no measurable effect on hospitalization rates or mortality rates in the affected communities. One reason could be that the hospitals that closed were of lower quality than those in the region that remained open, the study said.

“Is it an inconvenience? Sure,” said Dr. Ashish K. Jha, a professor of health policy at Harvard and an author of the study. “But do patients do worse when they have to travel a little farther, at least from a clinical health point of view? They don’t — even for really time-sensitive conditions.”

Mr. Day said the Mercy system, which owns 46 hospitals in Arkansas, Kansas, Missouri and Oklahoma, tried for years to keep the Independence hospital afloat. But it never succeeded in referring patients to larger Mercy hospitals for specialty care, he said, thus hurting the system’s bottom line. The closest large Mercy hospital was about 85 miles away in Joplin, Mo., and Independence residents preferred to travel to Tulsa or the 40 miles to Bartlesville, Okla.

Two Republican state legislators from Independence, Senator Jeff King and Representative Jim Kelly, said they hoped some version of state-based Medicaid expansion would seriously be considered in the next legislative session to help prevent more hospital closings. Mr. King said that while he still opposed a straight expansion of Medicaid, he was open to the type of alternative model that Indiana and several other Republican-led states have pursued.

“My children’s children will not be born in Mercy — like I was, like my kids were,” said Mr. King, a father of two. “That is a new fact of life that we are addressing in the best way we can.”

Mr. Kelly, who is also the hospital’s board chairman, said he feared that Independence might be just the “tip of the iceberg,” and that lawmakers needed to act to help rural communities like his.

“If we don’t want to expand Medicaid,” he said, “we need to find an answer.”