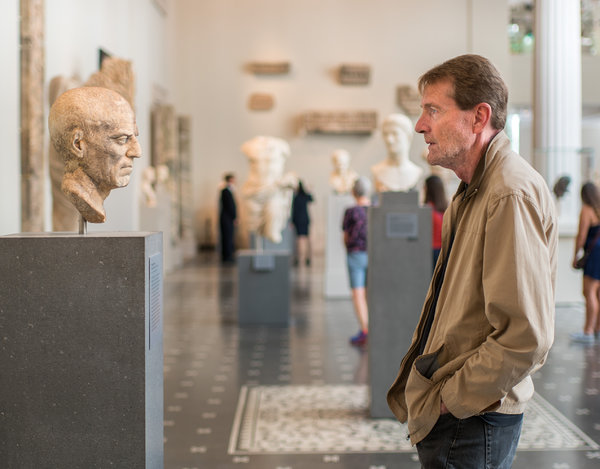 Lee Child, the author of the Jack Reacher crime novels, starts a new book each September and finishes sometime in spring, 20 books in 20 years. The most recent, “Make Me,” just took over the No. 1 spot on the New York Times best-seller list. He spends Sundays the way many writers do, in his own bubble. “It’s hard for others to understand, because you’re living in this made-up zone of fantasy, where that seems real to you, and the real real stuff seems odd,” he said. Mr. Child, 60, whose real name is Jim Grant, lives on the Upper West Side with his wife, Jane Grant.

EASTERN EXPOSURE My bedroom faces east, so I get woken up by the sun. What I really love is a winter Sunday when it has snowed overnight. You get that special quality of light, and you get the silence because there’s no traffic. You have that paralyzed feeling that’s always fun for a while.

FUEL I put on a pot of coffee. That’s my essential fuel, so that’s the first thing. I think my record is about 36 cups.

FUSS Quite often if I’m in the middle of something, or if a book is getting towards the end, then while the coffee is brewing I’ll take a look at what I did yesterday and start fussing with it.

FRENCH FAMILY FOOD Sometimes I will go to a restaurant called La Mirabelle, on 86th and Columbus, which is a completely authentic middlebrow French restaurant and therefore not quite as popular with the casual Sunday brunch crowd. That’s my favorite cuisine in the whole world, what in France they call a family restaurant. It’s not Michelin-star, it’s not a bistro, it’s somewhere in the middle.

ART WALK There’s a gentler pace on a Sunday. It’s some kind of human consensus, so I will usually take the opportunity to go to a museum. Museums are always crowded, but on a Sunday somehow it feels a little more benevolent and relaxed.

INTO THE WOODS I’ll walk through the park from the 85th Street entrance on the West Side. It’s a fairly short walk across the park to the Metropolitan, but it’s a great walk. You can have a little detour to Summit Rock, which is this immense geological thing that reminds me of what the island must have looked like before civilization hit. And then you come back and walk through the Pinetum, which is very grand and majestic. And then the walk becomes a real New York walk. You go by the lawn, where there’s probably a pickup baseball game, and as you approach the Metropolitan there’s probably a jazz trio or two.

DUCK IN I’ll maybe start at the Guggenheim. I’ve got memberships to all the museums so it’s not an issue to just duck in and out. Then I’ll probably walk down to the Metropolitan and do the same. Jane and I have this lifelong project that we’re going to study every room in the Metropolitan, which probably will take a lifetime. We’ll go and do two or possibly three rooms, then quit. If it’s a nice day, I might loop all the way around to the Modern.

HUNGER PANGS If we’re together, either we’ll cook or go out or get delivery. If it’s just me, a bowl of cereal could be it.

CATCHING UP WITH FRIENDS The secret disadvantage that writers have is that writing takes away from reading time. So it’s very appealing to me to say I’ll take the evening off and read a book. I’ll read absolutely anything. I read my peers and contemporaries because at a certain level a book is almost a diary of how that person felt during that year. So I read all my friends to catch up on their news.

UNTANGLING Usually I’ll have a cigarette or a joint. Listening to music is my other relaxation. I find that music is helpful clarifying thoughts for writing. Writing is not all that different from music. It has a time base, it has chronological development, it aims toward something in the same way that a piece of music does. A good piece of music untangles thoughts and points a direction for what I should write tomorrow. I’m pretty much a classic rock type of guy, Led Zeppelin, Pink Floyd, blues. But I’m a bit of a sucker for Adele, Dido, people like that. Nothing better than to have women sing a song directly into your ear.

DON’T LOOK BACK I try not to look at my writing near bedtime, because it will fire my brain up.