His neighbors are still an issue.

“Tech people — they see a bunch of kids hanging out in front of the recreation center, they call the police,” said Mr. Gascon, a 29-year-old lifelong neighborhood resident. “They don’t know; you live with 10 or 12 people in one apartment, you want to be outdoors until you sleep.”

Mr. Gascon belongs to United Playaz, an organization in which former gang members try to keep young people from turning to crime. Now, he and others on both sides of this starkly divided district are searching for some level of coexistence. 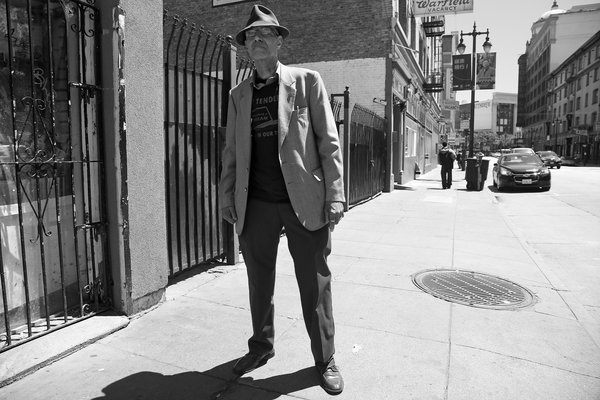 Del Seymour standing on a block in the Tenderloin where he sold crack for 18 years before getting sober eight years ago. He now leads Tenderloin tours and teaches children how to navigate a tech job interview.
JIM WILSON / THE NEW YORK TIMES

Four years ago, tech companies like Twitter entered San Francisco’s Mid-Market, an area that includes the Tenderloin and South of Market, or SoMa, neighborhoods. For a tax break that froze the city’s payroll take, they put thousands of wealthy and educated young workers into one of San Francisco’s poorest and most densely populated areas.

More companies have come, along with venture capitalists, macaron cookie shops and more police on Market Street, the main drag. But as this neighborhood’s longtime residents are learning, newfound wealth for some does not mean newfound prosperity — or even livability — for everyone. If anything, it has amplified the gap between rich and poor.

Thousands of white-collar employees build a digital future around the corner from drug dealers, street filth and homelessness. Vegan choices steam in free corporate cafeterias a few floors above people eating from trash cans. The number of homeless people has not notably increased, but a building frenzy has eliminated the vacant spaces where they once sought refuge. 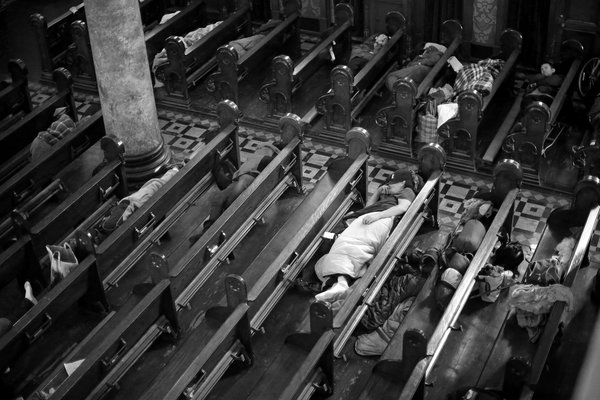 As that money heads into Mid-Market, nothing shows the gap like the price of shelter: Around the corner from the United Playaz building is a single-room occupancy residence, or S.R.O., called the Sunset. It costs $65 a night, almost twice what Mr. Gascon paid there a decade ago. One short block away, a refurbished Best Western Plus Americania recently posted rates of $460 a night.

Across the street from Twitter, the NEMA, or New Market, apartments are 96 percent occupied. Some studio apartments in the building rent for more than $4,000 a month. On a Tenderloin block with $70-a-night S.R.O.s, a business called Bulldog Baths charges up to $90 nightly to board a dog.

Despite these disparities, it is unlikely that tech will completely dislodge the poor. The Tenderloin’s residential hotels were built soon after San Francisco’s 1906 earthquake, giving the district hundreds of listed historic buildings that can’t be easily demolished or even revamped. And there are a lot of fierce and litigious local housing advocates, along with a number of social services in the area.

Besides, low-paying work is booming too, and people who do those jobs need a place to sleep. 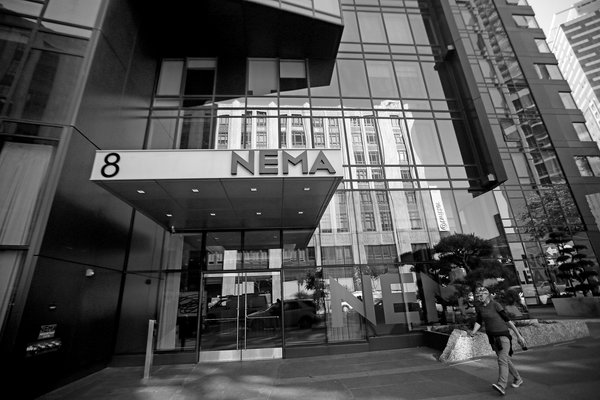 Across the street from Twitter, the NEMA, or New Market, apartments are 96 percent occupied. Some studio apartments in the building rent for more than $4,000 a month.
JIM WILSON / THE NEW YORK TIMES

“Restaurant workers, retail employees, dog walkers — all those jobs that serve wealthy people — have exploded,” Mr. Egan said. “If you don’t have Tenderloin-type S.R.O.s, they have nowhere to go. We also have married couples with four kids living in 100-square-foot spaces.”

Even the tiny spaces are feeling the pressure. According to data compiled by the city, in 2000, median Tenderloin rent was $374. By 2013, it was $455. Rent in the nearby Financial District rose 40 percent, to $2,000, and a boom in luxury apartments fetching NEMA-type rents has almost certainly raised that median since 2013, Mr. Egan said.

A result is a big divide in a very small urban space.

“My district has the poorest residents of the city. I also represent the wealthiest ZIP code,” said Jane Kim, a member of San Francisco’s board of supervisors who lives in SoMa. 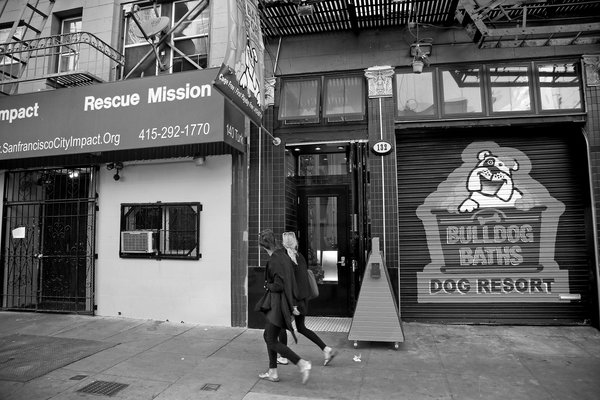 A block in the Tenderloin where a single-room occupancy residence, or S.R.O., is located. In 2013, the Tenderloin’s median household income was $12,210, while the Financial District’s was $115,233.
JIM WILSON / THE NEW YORK TIMES

Going by ZIP codes, her district includes neighborhoods a 10-minute walk apart with annual household incomes that range from $22,500 to $164,000. “I campaign one day at a homeless shelter, the next day at Blue Bottle Coffee,” where techies line up for high-end coffee, she said. “It’s whiplash.”

Itis questionable how or whether any effort can close the gap. Twitter recently constructed what it calls a “NeighborNest” across the street from its 2,500-employee headquarters.

“We decided, ‘We’re a tech company — what if we built a tech center?’” said Caroline Barlerin, head of community outreach and philanthropy at Twitter. It has nine lockers for mothers to store backpacks, a kitchen like a Twitter snack station and a thin collection of books with titles like “Metaskills: Five Talents for the Robotic Age.”

On a recent Friday, five volunteers hovered over seven children in a “Coding for Kids” class. The course runs for a total of four hours over two weeks.

Twitter spent $3 million on what Ms. Barlerin calls “a start-up within a start-up.” And on April’s companywide biannual day of service, more than 1,000 San Francisco-based employees, or 38 percent Twitter’s staff, helped with various community projects.

Twitter says it is also giving $3 million to area nonprofits over the next four years. Among them is United Playaz, which got its building thanks largely to corporate donations. That was in return for the tax break that Mr. Egan calculated saved Twitter tens of millions. Twitter declined to comment on the size of its tax saving.

Mr. Gascon recently took some children to Twitter for a talk on managing a digital identity. “Our kids are all on social media and want to show off their bodies, maybe their guns,” he said. “They heard about how that can affect whether you get a job.”

The big surprise, he said, was when the children saw Twitter’s free and abundant employee snacks.

Within a few blocks of Twitter are now the tech offices of Yammer, Spotify, Square and Zendesk. The sheer number of employees enables a nearby market that sells $13 noodles and $120 bottles of wine to exist. Jessie Street, a once-nondescript alley one block off Market, now has dining tables, synthetic grass and security guards.

Zendesk sends small numbers of employees out into the neighborhood to help at schools and meal services. It encourages employees to eat in the neighborhood, perhaps one reason a “wine tavern” now sits opposite a Subway sandwich store. For its own events, Zendesk hires a neighborhood organization that trains convicts to become cooks.

The smaller engagements, Ms. Kim said, work better than Twitter-style blitzes. “Frankly, it’s a lot of work for nonprofits to figure out what to do with all those people — then they’re gone,” she said.

Some people are trying to bridge the divide on their own. At St. Boniface Catholic Church, 120 homeless individuals sleep in pews and receive toiletries. Stanford Rosenthal, a designer at LinkedIn, has over the last few months given out several hundred phone chargers to the homeless at St. Boniface and elsewhere.

Smartphones are not just limited to the wealthy newcomers; they are sold used on the sidewalk alongside clothing and DVDs. Tech workers have built smartphone apps and web pages that connect people with city services, perhaps even with a room for the night. For those without phones, there are listings of locations with free Internet access.

Some Tenderloin residents now give guided tours to tech workers, school groups and other interested parties, either directly or through local churches. These tours cover a range of topics including the history of the gay underground scene and meditations on why a mentally ill person might self-medicate with drugs. The idea is to help the techies feel connected to the area.

“Underlying almost every human activity is a desire for some kind of relationship,” said Sam Dennison, the minister of finance for Faithful Fools, a local advocacy group. The Fools’ one-day weekend retreat in the Tenderloin was recently converted into a two-hour Friday session for corporations.

A recent walk with Ms. Dennison through the 30-block district, population about 25,000, included visits to community gardens, former jazz clubs, a senior center and a corner store used by drug dealers. It was interrupted when a tech executive stepped out from his Tesla.

“In good conscience, I cannot have my employees here,” said Jason Calacanis, an Internet entrepreneur. “There is a false narrative that it is getting better here. I’ve seen stabbings, people defecating in the street.” A former resident of Los Angeles, he is relocating to San Francisco’s Financial District.