A Wizard at Prying Government Secrets From the Government – NYTimes.com
http://mobile.nytimes.com/2015/07/20/business/a-wizard-at-prying-government-secrets-from-the-government.html 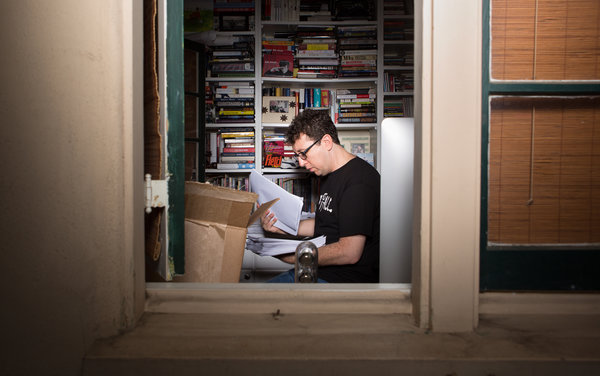 LOS ANGELES — When the reporter Jason Leopold gets ready to take on the United States government, he psychs himself up by listening to the heavy metal bands Slayer and Pantera.

Mr. Leopold describes himself as “a pretty rageful guy.” He argued recently with staff members at his son’s preschool because he objected to their references to “Indians” and they objected to his wearing family-unfriendly punk rock T-shirts to school meetings.

Mr. Leopold, 45, who works for Vice News, reserves most of his aggression for dealing with the government. He has revealed about 20,000 pages of government documents, some of them the basis for explosive news stories. Despite his appearance — on a recent day his T-shirt featured the band name “Sick of It All” — his secret weapon is the opposite of anarchic: an encyclopedic knowledge of the Freedom of Information Act, the labyrinthine administration machine that serves it and the kind of legal judo often required to pry information from it.

His small office, just off the kitchen in his home here, is littered with envelopes from various branches of the government and computer disks filled with secrets. His persistence has led to numerous revelations — some in documents that have been released exclusively to him, and others in documents that have been released to multiple reporters after pressure has been brought by Mr. Leopold.

They have included a series of disclosures from Guantánamo Bay; racist emails from the Ferguson, Mo., Police Department released after the shooting death of Michael Brown by a police officer and the subsequent racial unrest in the city; and some details of unreleased Central Intelligence Agency memos on torture (another report was released by the Senate Intelligence Committee in December).

“Every time I have a FOIA I think nobody has come across, he seems to already have a piece of it,” said Adam Goldman, who reports on terrorism and national security for The Washington Post.

Since the Obama administration has overseen a crackdown on government employees talking to journalists, the Freedom of Information Act has gained a new importance as a source of information. But critics accuse the government of deliberately making the process difficult — Mr. Leopold must often sue to get documents. Its role, as a fraught but increasingly mainstream means of maintaining government transparency, has been the subject of a series of congressional hearings, which have aired the experiences of journalists and others, including Mr. Leopold, who testified at one this summer.

A number of stories over the last several years based on government documents leaked by WikiLeaks and by the former National Security Agency contractor Edward J. Snowden seem to have piqued the interest of the public, and of journalists, in acquiring such materials, Mr. Leopold said.

And nobody seems to do it as obsessively as Mr. Leopold. In an era of ideologically driven news, Mr. Leopold says, publishing government documents is perhaps the most neutral form of reporting. A recent scoop, a defense intelligence agency document that said the government had estimated that Mr. Snowden had taken 900,000 Defense Department documents, was seized on by supporters and opponents of Mr. Snowden to make their own points, he said.

“I would love to have somebody drop a million pages of documents on me,” Mr. Leopold said, referring to leaks. “But even if that does happen, it’s not going to happen every day, every week, right? So I have to figure out how to do this work.” He has studied the law in its entirety, about two dozen pages, and follows each legal and administrative development that affects it. His submissions requesting information are so detailed that they sometimes run to 10 pages, he said.

He has thousands of requests outstanding, he said. Every day he comes home and checks his mailbox. When he sees the envelopes, and thinks they may contain documents he wants, he drops everything he is holding and rips them open like Christmas presents.

The rush of adrenaline, he said, can be compared to a cocaine high. Mr. Leopold would know. He has written, in a book entitled “News Junkie,” of his addiction to the drug and his felony plea for stealing CDs to feed a $300-a-day habit.

Mr. Leopold has also been through a series of scandals, including accusations of plagiarism and improper sourcing (which Mr. Leopold disputes). He was fired from The Los Angeles Times in the early 2000s after threatening to rip off another journalist’s head after the colleague had complained of his loud music.

A decade ago, he was an outsider, trying to break news on smaller websites from his house. Until he joined Vice News in 2014, he used a credit card to pay thousands of dollars required for lawsuits, an essential part of forcing documents out of government archives and into public view.

“I love the score,” he said. “So maybe there’s this drug-ish thing in me that still exists, maybe that was always part of my personality. I love the score. I love the score! Particularly when it is from the government! I just got you to give me your own documents, you know!”

The Freedom of Information Act was enacted in the 1960s to help citizens gather information on their government. In practice, it can seem as if Kafka and Orwell sat down together to plot a nightmare of bureaucratic complication.

Each government agency or department has its own FOIA office that it must finance out of its own budget, said Scott A. Hodes, a lawyer specializing in freedom of information requests, and a former acting head of the F.B.I.’s Freedom of Information Act section litigation unit. Some records are kept electronically, and are easily searchable. Others are more antiquated.

The office of the secretary of defense, a man who runs a department with an annual budget of more than $500 billion, was reported, in 2013, not to be accepting FOIA requests because its fax machine was broken. The C.I.A.’s FOIA website has been down for some time, Mr. Leopold said, and there seem to be few signs it will be fixed. And there is one small Treasury Department office, he said, that has no working email, fax number or address, and that does not answer the phone.

Even when Freedom of Information Act officials are accommodating, Mr. Hodes said, they often have trouble persuading colleagues that the public good would be served by allowing journalists and citizens to look at documents.

Melanie Ann Pustay, who helps oversee the government’s compliance with the law as director of the Office of Information Policy at the Justice Department, denied that officials used the complexity of the law to halt legitimate disclosures. The problem, she said, is the strain on the system as it deals with more and more requests, most of them from private citizens, or companies, rather than reporters. “That’s really the No. 1 problem,” she said, “to keep up with demand.”

Mr. Leopold has no intention of easing off. In fact, he put in a request for any of Ms. Pustay’s emails that include the term “FOIA.” His work, he said, is a kind of redemption. Decades ago, he noted, he had to hide his felony plea and former addictions from employers, and fit appointments with a parole officer around job interviews.

Though Mr. Leopold has landed scoops and big interviews by more conventional means, he said, using government documents feels beyond reproach. Others may question their conclusions, but not the source. “It was subconscious, but it was there,” he said. “This is part of the way that I am going to win back credibility. So I thought: I am going to work really hard at this.”