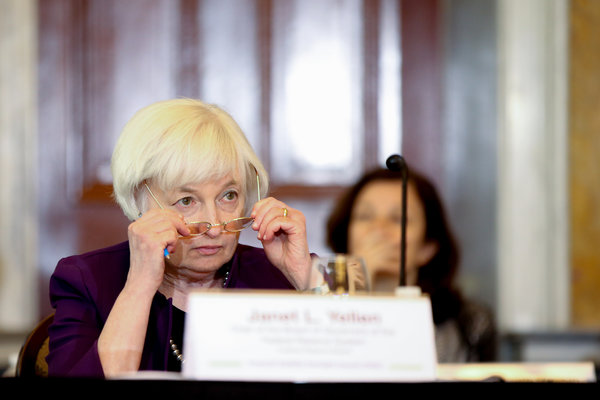 WASHINGTON — Janet L. Yellen, the Federal Reserve chairwoman, told lawmakers Wednesday that proposals to increase congressional oversight of the central bank could cause collateral damage to the broader economy.

Ms. Yellen’s warning, delivered in prepared testimony to the House Financial Services Committee, marked an intensification of the Fed’s opposition to the measures, mostly backed by congressional Republicans.

It is likely to heighten tensions between the Fed and its overseers.

“Efforts to further increase transparency, no matter how well intentioned, must avoid unintended consequences that could undermine the Federal Reserve’s ability to make policy in the long-run best interest of American families and businesses,” Ms. Yellen said, according to an advance copy of her prepared remarks.

She is scheduled to appear before the committee at 10 a.m.

And she suggested that the economic outlook was brightening, mentioning among other factors the benefits of low oil prices, low interest rates, increased hiring and the spillover benefits from stimulus campaigns in other developed economies.

“Looking forward, prospects are favorable for further improvement in the U.S. labor market and the economy more broadly,” she told the committee.

Ms. Yellen tipped her hat to problems in Greece and China but, like other Fed officials, she does not seem overly worried. “Although the recovery in the euro area appears to have gained a firmer footing, the situation in Greece remains difficult,” she said. “And China continues to grapple with the challenges posed by high debt, weak property markets and volatile financial conditions.”

The International Monetary Fund has argued the Fed should wait until next year before raising interest rates. A few Fed officials agree. But Ms. Yellen made clear Wednesday that the position of the majority had not changed.

“If the economy evolves as we expect, economic conditions likely would make it appropriate at some point this year to raise the federal funds target rate, thereby beginning to normalize the stance of monetary policy,” she said.

The Fed’s relationship with its congressional overseers has deteriorated since Ms. Yellen took over the Fed and Republicans took over both chambers of Congress.

Ms. Yellen’s last appearance before the House committee, in February, was an openly hostile affair. Ms. Yellen is scheduled to answer the committee’s questions on Wednesday after reading her testimony.

Representative Jeb Hensarling, a Texas Republican who is chairman of the Financial Services Committee, is pursuing an investigation of a 2012 leak of confidential information about the Fed’s bond-buying plans. The Fed has refused to provide some information, citing a continuing investigation by the Justice Department, a position Mr. Hensarling has described as “willful obstruction.”

Congress is also considering a number of measures to increase oversight of the central bank. One proposal would require the Fed to articulate a rule for setting interest rates, and then justify deviations from that rule. Another would subject the Fed’s policy-making process to regular external review.

Ms. Yellen and other Fed officials argue that such changes would inhibit the conduct of monetary policy. The Fed, like central banks in other developed nations, is insulated from political pressure so it can make unpopular decisions that have long-term benefits, like raising interest rates to control inflation.

Ms. Yellen said Wednesday that the Fed already ranked “among the most transparent central banks,” and cautioned against opening new windows.

“Measures that affect the ability of policy makers to make decisions about monetary policy free of short-term political pressure, in the name of transparency, should be avoided,” Ms. Yellen said in her testimony.

Proponents of the measures, however, say additional oversight would strengthen the conduct of monetary policy. They argue that the Fed has aimed at an increasing number of targets since the financial crisis, including job growth and financial stability, at the expense of a pure focus on inflation.

“The Fed’s clamor for independence is its underpinning for circumventing any sort of congressional accountability,” Representative Sean Duffy, a Wisconsin Republican, said at a Tuesday hearing on Fed transparency.