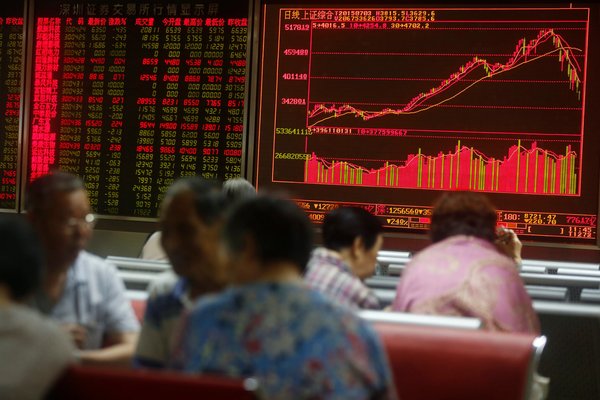 HONG KONG — For nearly three years, President Xi Jinping of China has crushed opposition by silencing and often locking up anyone who dares defy the government. But that aura of invincibility has been shaken by stock market speculators who have made a mockery of efforts to halt a steep slide in share prices.

The losses — Chinese shares have shed more than a quarter of their value in three weeks — pose an added risk, and possibly greater danger, to a global economy grappling with Greece’s difficulties in repaying foreign loans and its possible exit from the euro. About $2.7 trillion in value has evaporated since the Chinese stock market peaked on June 12. That is six times Greece’s entire foreign debt, or 11 years of Greece’s economic output.

Skeptical investors have so far shrugged off each step the government has taken to keep share prices aloft: an interest rate cut, threats to punish rumormongers, allowing the national pension fund to buy stocks and even plans to investigate short-sellers who have placed bets that the market will fall. The faltering of these measures has put an embarrassing dent in the halo of unruffled supremacy built up around Mr. Xi’s administration, and this weekend his government doubled down again, betting that it could beat bearish market sentiment into submission.

The government rolled out further initiatives in hopes of forestalling another market rout on Monday: 21 brokerages agreed on Saturday to set up a fund worth at least $19.4 billion to buy blue-chip stocks, and both of the country’s stock exchanges halted all new initial public offerings of shares.

On Sunday, the government brought in the central bank, the People’s Bank of China, and an investment arm of the country’s sovereign wealth fund to support the effort.

The China Securities Regulatory Commission, which governs the stock markets, said that the central bank would give financial support to the state-controlled China Securities Finance Corporation to “enhance its capacity to safeguard market stability.” The finance corporation lends to brokerage firms, which then lend the money to customers who want to buy shares.

In addition, China Central Huijin Investment, a company owned by the country’s sovereign wealth fund that usually invests in banks and other financial institutions, said on its website that it had recently bought into investment funds traded on the stock exchanges, and would continue to play a role in “market operations.”

“This is probably the most public and obvious instance where the government’s omnipotence has been challenged,” said Victor Shih, an associate professor at the University of California, San Diego who studies the politics of financial policy making in China. “I think the last couple of weeks really showed that, no, they do not have the ability to make anything happen.”

The recent stock market losses are equal to three months of China’s economic output, which reached $10.3 trillion last year. Economists increasingly worry that the losses may lead to a sharp drop in spending by Chinese consumers who have lost much of their savings.

A plunge in consumer confidence could deliver a shock to a Chinese economy that is already slowing, as the real estate market has been struggling to cope with millions of new but empty apartments and as hundreds of thousands of export-oriented factories face tepid overseas demand. And with China now the world’s dominant market for commodities and the fastest-growing buyer of exports from manufacturing giants like Germany, the nosedive in China’s stock markets could hurt economic growth around the world.

“While turmoil in Greece has added to investor jitters of late, China’s stock market slide could prove ultimately more damaging for the global economy,” said Frederic Neumann, the co-head of Asian economic research at HSBC.

It could also have political ramifications. Harry Harding, a specialist in Chinese politics who is a visiting professor at the Hong Kong University of Science and Technology, said the plunge in the Chinese stock market could produce three successive ripples. The first would consist of investment losses for households, the second would lie in slower economic growth and the last would be a political backlash against Mr. Xi and his team.

Unlike his predecessor, Hu Jintao, Mr. Xi has taken direct control of economic policy making. He and the premier, Li Keqiang, the country’s second-ranking official, have been mute on the stock market’s difficulties. Mr. Xi has also been unafraid of making enemies with an unrelenting anti-corruption campaign.

“There are significant forces who have their knives out for him and are waiting for him to fail,” Mr. Harding said.

Investors with heavy losses include He Wuhong, a Beijing middle school teacher and mother of a toddler. She and her husband invested nearly all of their $65,000 in savings in China’s stock market in late April and early May, only to see their account’s value fall by almost half in recent days. She cannot even sell her shares, because their prices fall 10 percent each morning, resulting in an automatic suspension of trading for the rest of the day.

“My heart can’t take it,” she said. “We would probably sell off our holdings as soon as the market rebounds enough to make us even.”

Ms. He is lucky in one way: Unlike many other investors, she did not borrow money to buy stocks. A ninefold increase in so-called margin lending by brokerage firms over the past two years helped fuel the rally. Many families borrowed money from banks, finance companies, neighbors and others to play the market. Loans were made at annual interest rates of as much as 20 percent, with borrowers allowed to put little of their own money into stock market investments.

That raises the question of how well China’s financial system can absorb another round of bad loans when it is already burdened with a huge amount of lending to state-owned enterprises and local governments that can barely meet monthly interest payments. Professor Shih, of the University of California, San Diego, estimated that total margin debt in China, including informal loans made by the off-balance-sheet operations of banks, could approach $1 trillion.

Making matters worse is that many owners of companies have financed expansion by borrowing from banks against the value of their shares. The terms of these loans typically demand that the owners post additional collateral if the shares come close to falling below the outstanding balance on the loan. That point is arriving for many companies, with the Shanghai stock market down 29 percent in three weeks, its sharpest drop since 1992.

The problem for millions of investors is that share prices may not recover for years, if ever, for the more speculative stocks. Only a third of the Shanghai stock market, and even less of the Shenzhen market, consists of shares in large businesses.

The rest of the shares are mostly in small and midsize businesses, often with weak balance sheets and endemic corporate governance problems. Such companies are vulnerable to looting by their controlling shareholders at the expense of minority shareholders.

Shares in the big companies rose 20 to 30 percent in the 12 months leading up to the Chinese stock market’s peak on June 12. Hong Kong’s stock market, increasingly dominated by big mainland Chinese companies, rose only 17 percent in the period and has slipped 4.5 percent as mainland markets have nosedived.

But in those 12 months, shares in many small mainland companies quadrupled, quintupled or more, pulling the overall Shanghai market up 149 percent.

Huge increases in percentage terms were possible because shares in hundreds of these companies were cheap a year ago. As their share prices began climbing, they drew in millions of first-time investors who bought shares simply because they were rising fast and seemed likely to continue doing so.

By contrast, foreign buyers and many domestic institutions cautiously gravitated toward larger companies’ shares. Foreigners account for only about 4 percent of the Chinese stock market and face severe restrictions on their ability to bet on price declines in China. Having missed the rise in shares over the past year, some now appear to be swooping in: Purchases in Shanghai by international investors in Hong Kong reached their third-highest daily volume on Friday.

Shirley Lin, a political economy professor at the Chinese University of Hong Kong who is a former Goldman Sachs partner, said that the stock market’s fall could have a profound effect on China’s economic policies and its pattern of economic growth in the months and years ahead. The government’s difficulties in controlling the fall are likely to make policy makers more hesitant about further financial liberalization, she said, and the stock market rout is likely to further stunt the expansion of small and midsize companies.

These nimble companies have been among the biggest contributors to economic growth in China. They have long struggled, with little success, to obtain loans from state-controlled banks and had been hoping to raise more money by selling shares instead. Now, those hopes seem to have been dashed.

“The first ones to go out of business will be the small and medium-sized businesses, and not the state-owned enterprises, which have not been contributing to China’s economic growth,” Ms. Lin said.

Mr. Xi’s policy advisers are not ignorant of the risks facing China. Liu He, an economic policy maker close to Mr. Xi, wrote an essay in 2012 on lessons from previous international financial crises:

“After a crisis erupts, policy makers always confront the three big challenges of populism, nationalism and bringing politics and ideology into economic problems,” he wrote. “Market forces constantly challenge government policies that lack conviction, and this makes the crisis even worse.”