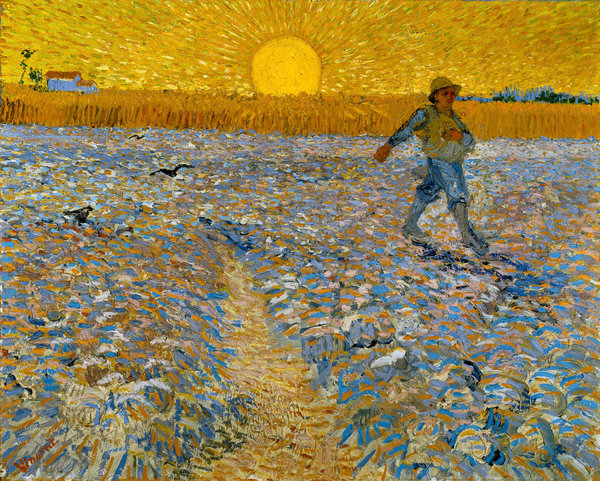 WILLIAMSTOWN, Mass. — Someday, museums will run out of themes for packaging van Gogh exhibitions, and that’s fine. He’s one of those artists you just want to spend time with, no pretext needed, because he’s some kind of instant soul mate, startling, difficult, vulnerable, always willing to make so much of himself available to you.

Still, a theme, even a broad one, can be useful in directing us to aspects of an artist’s life and work we might not otherwise zero in on. Such is the case with “Van Gogh and Nature,” which opens on Sunday at the Clark Art Institute here and qualifies as one of the summer’s choice art attractions. The Metropolitan Museum of Art has a special display of four van Goghs and advertises it as a show. The Clark exhibition has more than 40 paintings, some familiar, many not, on loan from American and European museums (including the Met), interspersed with drawings. It’s a low-key big deal.

“Nature is very, very beautiful here,” van Gogh wrote to his younger brother Theo in the summer of 1890, a few weeks before he took his own life. He was referring to the landscape of olive groves and grain fields surrounding the town of Auvers-sur-Oise northwest of Paris, where he had moved, after a hospitalization, to be closer to family. He had written almost identical words in other letters, from other places, over the years. Natural beauty was the first thing he noticed wherever he went.

He grew up with it. His father was a Dutch Reformed minister in southern Holland. The parish was rural: farmland, marshland, forest. The parsonage came with a sizable garden. In a memoir published in 1910, one of van Gogh’s sisters remembered him as a child avidly collecting insect specimens, studying plants, keeping track of birds. As a young adult apprenticed to an art dealer in London, he sent letters home about springtime in the city, describing not the people he encountered, or the architecture, but the flowers — “lilacs and hawthorns and laburnums” — he found in parks. To Theo, already destined to become a dealer, he wrote, “Painters understand nature and teach us to see.”

At this point, in the 1870s, van Gogh was not a painter himself. That would come a few turbulent years later, after he’d been fired from his art job and had failed at attempts to be a schoolteacher, then a preacher to the poor. For years, he had been sketching for pleasure. Finally, approaching 30, he decided to take it seriously, make it his work. The earliest piece at the Clark is an 1881 ink drawing called “Marsh With Waterlilies: Etten,” and it’s great. Done near his family home, it’s a light-soaked vista with a small bird hovering at its center. But it’s something else, too: a weave of thousands of filament-fine lines, as energy-charged as an encephalogram.

His first oil paintings soon followed. Some were gnarly depictions of the Dutch peasants and miners he had lived with, to their puzzlement, during his time as a self-styled evangelical minister. Others were shadowed landscapes inspired by earlier 19th-century French Barbizon artists like Charles-François Daubigny. (A wonderful red chalk Daubigny drawing, owned by the Clark, is in the show, which has been organized by three curators: Richard Kendall, Chris Stolwijk and Sjraar van Heugten.)

And there were still lifes, many, of flowers, bird nests and sheaves of wheat. From all of this, van Gogh’s talent is clear; his sensibility is evident. What he lacked was technical know-how and news of current trends, so in 1886 he went to Paris to get them.

There he roomed with Theo. To save money, they lived away from the center of the city, in Montmartre, a neighborhood that retained the atmosphere of a village, with windmills, cow paths and vegetable patches, but was also plenty urban with an active night life. Apartment high rises were going up nearby. The mix of elements meant that, with some visual editing, van Gogh could continue to paint rural scenes while living in the city, and he did, though his ideas of how nature could be depicted changed after he was exposed to the radical style of the day, Impressionism.

He took lessons from it: He turned up his color, broke down and abstracted his forms. This might have been expected to lead him farther away from naturalism, but it pushed him toward it. In an extraordinary 1887 painting called “Undergrowth,” he’s deeper into nature than ever. The dramatically cropped image of a tree trunk standing amid foliage suggests a view of the world as seen by some forest creature peering out from a leafy thicket.

A town-versus-country debate pervaded the popular fiction of the day. (George Eliot and Émile Zola were among his favorite writers.) He liked cities, or thought he did. But they gave him no rest; they wore him out. During two years in Paris, his mental and physical health deteriorated. In February 1888, he left, heading south to Provence with hopes of finding peace of mind, clement weather, and, through some magical thinking, an art-friendly utopia resembling his cherished fantasy of a nature-intensive Japan. Arles, where he ended up, initially provided some of this, and that’s reflected in the work he did there: balanced compositions of patchwork fields and tree-lined roads.

But the productive tranquillity didn’t last. Paul Gauguin joined him, and what had been envisioned as a union of kindred spirits turned violent. Van Gogh sensed increasing hostility from his Arles neighbors. He was heading for a breakdown. It’s risky to read art through psychiatric filters, but some of the Arles paintings feel charged with crisis. “The Sower” is one, with its single figure marching across what looks like a boiling lava stream of blue and orange paint with a giant sun embedded like a bullet in the sky. Some commentators have interpreted the sun as a symbol of God. I see enemy, not deity.

Van Gogh signed himself into the local mental hospital, and from there went to another, larger one in nearly Saint-Rémy. After a long recuperation, he calmed down and regained his powers of concentration. Nature was on his mind. From the Arles, he had written letters with chantlike lists of flowers he’d seen in the hospital courtyard: forget-me-nots, Christmas roses, anemones, buttercups, daisies. In Saint-Rémy, he collected specimens the way he had as a child, but this time through art: an ethereal drawing of a dead sparrow, a life-size painting of a large moth, a painting of a patch of dandelions seen at kneeling-down eye level.

But danger is near. Monumental, solidly grounded images of cypress trees come from this period. But so do fantastic mountain landscapes set at a tilt, as if they were sliding sideways off the surface of a capsizing planet. Van Gogh made one last retreat, to Auvers, where he continued to paint the world in high relief and on high boil, and produced at least one picture like no other.

Titled “Rain-Auvers” (1890), it was partly inspired by a Japanese print of figures dashing over a blond-wood bridge in a downpour. In van Gogh’s version, the bridge becomes a horizontal, plateau-like wheat field, split down the center by a kind of valley-crevasse from which flame-shaped purple trees lick up, as a black crow floats in midair. Most arrestingly, the entire painting is covered with a net of descending diagonal lines, lines of rain.

Seen from afar, the lines look incised, as if slashed with a knife. Closer up, they look painted but oddly defacing, as if someone had tried to cancel the image out. If you know that picture was finished just days before van Gogh died, you might see in it a gesture of despair. If you have been through the show and paid attention to how, through art, he made the natural world his own, and ours, you might see that that’s what he’s doing, in a new, inventive way, here. And if you’ve known this artist as a longtime friend, as many have, you’ll know that he’s bold as a questioner, but shy as an answerer. He doesn’t explain himself. He doesn’t have to.