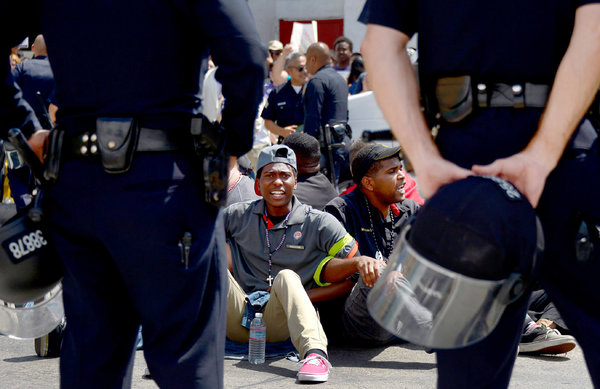 Americans are broadly concerned about inequality of wealth and income despite an economy that has improved by most measures, a sentiment that is already driving the 2016 presidential contest, according to a New York Times/CBS News poll.

The poll found that a strong majority say that wealth should be more evenly divided and that it is a problem that should be addressed urgently. Nearly six in 10 Americans said government should do more to reduce the gap between the rich and the poor, but they split sharply along partisan lines. Only one-third of Republicans supported a more active government role, versus eight in 10 of Democrats.

These findings help explain the populist appeals from politicians of both parties, but particularly Democrats, who are seeking to capitalize on the sense among Americans that the economic recovery is benefiting only a handful at the very top.

Far from a strictly partisan issue, inequality looms large in the minds of almost half of Republicans and two-thirds of independents, suggesting that it will outlive the presidential primary contests and become a central theme in next year’s general election campaign.

“There is a small group of people in our country who own or control a vast majority of the wealth,” Stephanie Alteneder, 28, a Democrat and a high school teacher from Los Angeles, said in a follow-up interview. “There are a lot of systems set up so that the people who have money get to make more of it.”

The percentage of Americans who say everyone has a fair chance to get ahead in today’s economy has fallen 17 percentage points since early 2014. Six in 10 Americans now say that only a few people at the top have an opportunity to advance.

The nationwide telephone poll, conducted on landlines and cellphones May 28-31 with 1,022 adults, has a margin of sampling error of plus or minus three percentage points.

The survey touched on several issues relating to the economy and the workplace, showing that four in five Americans support requiring employers to offer paid parental leave, and even more support paid sick leave. A majority also favors requiring chain stores and fast-food restaurants to inform workers of scheduling changes two weeks in advance or to compensate them with additional pay if they fail to do so.

Seven in 10 Americans support an increase in the federal minimum wage to $10.10 from $7.25 an hour, although Republicans are about evenly divided on the question.

Americans were also skeptical of free trade. Nearly two-thirds favored some form of trade restrictions, and more than half opposed giving the president authority to negotiate trade agreements that Congress could only vote up or down without amending, a White House priority.

Still, it was Americans’ views on the distribution of money and opportunity in the country that were most striking. More than half of higher-income Americans said that money and wealth should be more evenly distributed. Across party lines, most Americans said the chance to get ahead was mainly a luxury for those at the top.

“People have to get a high school education and they have to go to college as well, and then they go out there and can only get a low-paying job,” said Betty Burgess, 70, a retired textile worker from Lincolnton, N.C., who is a Republican.

Almost three-quarters of respondents say that large corporations have too much influence in the country, about double the amount that said the same of unions. However, a majority of Americans said that workers who did not want to join a union at their workplace should be able to opt out of paying union fees, even as they benefit from the union’s protection and bargaining efforts. Unions generally oppose these right-to-work measures.

The phenomenon of public frustration about inequality rising several years into a recovery is not unprecedented. According to data that Leslie McCall, a professor at Northwestern University, has culled from the General Social Survey, a biennial survey by the National Opinion Research Center at the University of Chicago, some measures of concern about inequality rose steadily after the 1990-91 recession and did not peak until 1996, after which they fell for several years.

The poll also included a variety of intriguing findings about what Americans think should be done to reduce inequality.

Six in 10 Americans opposed requiring fast-food chains and other employers of hourly workers to raise wages to at least $15 an hour, the aim of a two-and-a-half year nationwide campaign led in part by a major union. (On Tuesday, Francis Slay, the mayor of St. Louis, threw his weight behind an effort to gradually raise the minimum wage there to $15 an hour by 2020, following similar moves in Los Angeles, San Francisco and Seattle in recent years.)

When asked about the other end of the income spectrum, two-thirds of Americans favored raising taxes on people with annual salaries exceeding $1 million. By 50 to 45 percent, they favored capping the income of top executives at large corporations, a measure that more than one-third of Republicans supported as well.