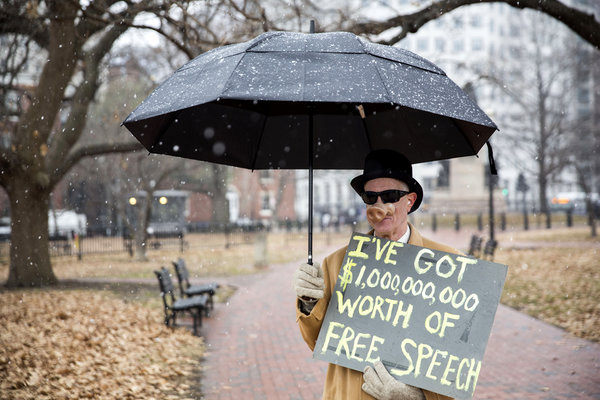 Americans of both parties fundamentally reject the regime of untrammeled money in elections made possible by the Supreme Court’s Citizens United ruling and other court decisions and now favor a sweeping overhaul of how political campaigns are financed, according to a New York Times/CBS News poll.

The findings reveal deep support among Republicans and Democrats alike for new measures to restrict the influence of wealthy givers, including limiting the amount of money that can be spent by “super PACs” and forcing more public disclosure on organizations now permitted to intervene in elections without disclosing the names of their donors.

And by a significant margin, they reject the argument that underpins close to four decades of Supreme Court jurisprudence on campaign finance: that political money is a form of speech protected by the First Amendment. Even self-identified Republicans are evenly split on the question.

“I think it’s an obscene thing the Supreme Court did,” Terri Holland, 67, a former database manager who lives in Albuquerque, said in a follow-up interview. “The old-boy system is kind of dead, but now it’s the rich system. The rich decide what’s going to happen because the Supreme Court allows PACs to have civil rights.”

Graphic | Americans’ Views on Money in Politics Most Americans say that money has too much of an influence on politicians and that campaign finance changes are needed.

The poll provides one of the broadest and most detailed surveys of Americans’ attitudes toward the role of money in politics since the Citizens United decision five years ago. And the responses suggest a growing divide between the nation and its highest court on constitutional questions that have moved to the heart of the American system, as the advent of super PACs and the abandonment of public financing by both parties in presidential elections have enabled wealthy donors, corporations and unions to play a greater role in political fund-raising.

In recent years, the Supreme Court’s conservative majority has steadily chipped away at restrictions on political donations while narrowing the constitutional definition of corruption. In a series of decisions, the court has rejected the notion that the access and influence afforded big donors can justify further restrictions on campaign money, while dismissing concerns raised by the court’s liberal wing that unrestricted political money skews policy-making in favor of the wealthy.

The broader public appears to see things differently: More than four in five Americans say money plays too great a role in political campaigns, the poll found, while two-thirds say that the wealthy have more of a chance to influence the elections process than other Americans.

Those concerns — and the divide between Washington elites and the rest of the country — extend to Republicans.

Document | A New York Times/CBS News Poll on Money and Politics The survey conducted May 28-31 examined Americans’ attitudes about the influence of money in political campaigns.

Three-quarters of self-identified Republicans support requiring more disclosure by outside spending organizations, for example, but Republican leaders in Congress have blocked legislation to require more disclosure by political nonprofit groups, which do not reveal the names of their donors.

Republicans in the poll were almost as likely as Democrats to favor further restrictions on campaign donations, even as some prominent Republicans call for legislation to eliminate existing caps on contributions.

“I think too much money is spent on campaigns, and it ends up being lopsided,” said Sonja Rhodes, 57, a retired secretary and a Republican from East Wenatchee, Wash. “They should pass a bill and instead of billions of dollars, spending should be limited to $10 million or so.”

But Americans appear to be as inured to the role of money in campaigns as they are disillusioned by it, expressing a deep cynicism about the willingness of elected officials to fight the system they inhabit or to change the rules they have already mastered.

More than half of those surveyed said they were pessimistic that campaign finance rules would be improved. (Republicans and independents expressed more pessimism, while Democrats were evenly divided.) Over half of respondents said that the current rules equally benefit the Democratic and Republican Parties.

And virtually no one in the poll ranked campaign financing as the most important issue facing the country.

The nationwide telephone poll, conducted on landlines and cellphones May 28 to 31 with 1,022 adults, has a margin of sampling error of plus or minus three percentage points.

Wearying of headlines about politicians who mix public life and personal enrichment — frequent flights on the private planes of billionaires, junkets paid for by corporate lobbyists and foreign governments, a high-end office redecoration billed to taxpayers — a number of respondents, in follow-up interviews, described political leaders as a kind of class apart.

“Candidates for political office are not in it just to serve the people; they also want the prestige and the perks,” said Elaine Manne, 69, a retiree from Alma, Ga. “They get so many little fringe benefits from being in office. Candidates should have to live for a period of time the way their average constituents live.”

Some expressed a profound alienation from their own government. They said they did not expect elected officials to listen to them. They described politics as a province of the wealthy. And, despite being inundated with political advertising — and being repulsed by the billions of dollars required to pay for it — they said they sometimes did not feel informed enough to come to an opinion about the candidates.

Even if they do vote, the responses suggested, Americans do not believe they can overcome the political clout of people and organizations with money. Winning candidates, a majority in both parties said, usually promote the policies favored by their donors.

“People with billions of dollars have a lot of influence with candidates that they help get elected,” Ms. Holland said. “You can see the dollar signs written on the wall.”

Yet few seem eager to participate in the country’s system for privately financed elections, even as fund-raising consumes more and more of elected officials’ time and energy. The vast majority of respondents said they had not given money to a candidate, party or other political organization during the past four years.

“It’s a very small percentage that has the most influence,” said John Carpenter, 60, a retired probation officer from Choctaw, Okla.

“Who do you think the candidate is going to listen to?” Mr. Carpenter added. “Your average taxpayer, or the head of a corporation who can write a check for a million dollars?”